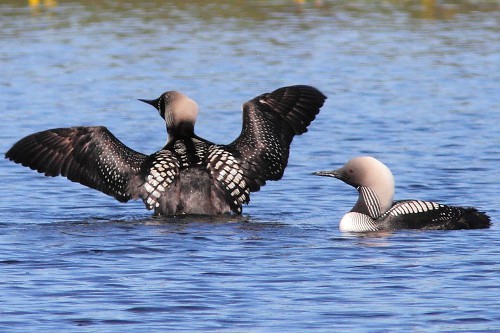 Characteristics and Range The Pacific Loon is morphologically very similar to the Arctic Loon (G. arctica, also known as the Black-throated Diver) of Eurasia with which it was once considered conspecific. The Pacific is the most abundant loon in North America and is strictly marine during the winter (Russell 2002). Breeding birds leave their arctic and subarctic nesting lakes to winter along the Pacific Coast as far south as Mexico's Baja Peninsula. The breeding distribution includes a large part of far northern North America, stretching from eastern Siberia to Hudson Bay's eastern coast. In breeding plumage, Pacific Loons are easily recognized by their distinctive silvery-grey head and hind neck, black throat, and vertical black-and-white stripes on the sides of the neck.

Distribution, Abundance, and Habitat The Atlas revealed only a handful of records, mostly in the Northern Boreal Mountains Ecoprovince, which closely match the range when The Birds of British Columbia was published, suggesting there has been little change in distribution since 1990. Access constraints and the remoteness of this bird's distribution may have resulted in it being under-recorded by the Atlas. An intriguing active nest record came from Squawkbird Lake at 1,550 m in the Omineca Mountains, which at approximately 55°N is one of British Columbia's southernmost breeding records. The species has probably been using this site "for years", but it is unknown if the lake, which is thought to contain no fish and only a healthy population of freshwater shrimp (Gammarus) species, is named for the territorial duets of its long-resident Pacific Loons (Vinnedge 2012). Prior to the Atlas, Burton (2006) found a pre-fledged chick on Embryo Lake, slightly south of Squawkbird Lake.

These loons tend to nest on ponds and small lakes less than 40 ha in area (Campbell et al. 1990), but some Atlas records were of birds on very large lakes. Pacific Loon distribution, and their choice of lakes, may be influenced by the presence of the larger and dominant Common Loon, which may compete for optimal breeding territories (Russell 2002). Owing to the low number of detections in British Columbia, there were insufficient data to evaluate abundance, population trends and habitat relationships.

Conservation and Recommendations Pacific Loons are not presently at risk in British Columbia or in their primary range. As with other subarctic and arctic birds, climate change may negatively impact breeding populations. On the coastal wintering grounds, these loons are susceptible to mortality from oil spills (Murphy et al. 1997), and by-catch in fishing nets (Hamel et al. 2009).