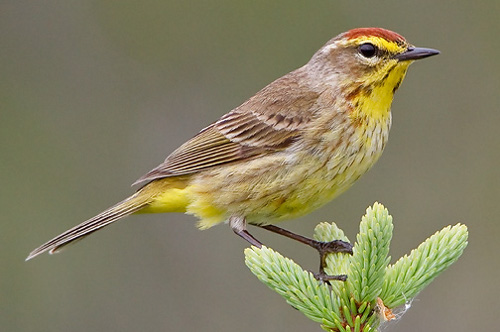 Characteristics and Range The Palm Warbler, despite its name, is among the most northerly breeding warblers. In its breeding plumage, the Palm Warbler has a streaked yellow breast, tan back and wings, and a ruddy cap. It is one of the group of birds that has its centre of distribution in the eastern Boreal Forest, and reaches the westernmost limits of its range in northeastern British Columbia. Palm Warblers migrate moderate distances to their main wintering grounds in the United States Southern Coastal Plains, along the Gulf Coast, and in the Caribbean (Wilson 2013). A few winter along the Pacific Coast, and since the 1960s Palm Warblers have wintered in very small numbers as far north as southeastern Vancouver Island and the Fraser Valley (Campbell et al. 2001).

Distribution, Abundance, and Habitat Palm Warbler breeding is restricted to the northeastern corner of British Columbia, where the Atlas survey results fill in distribution gaps but show little evidence of a change in breeding range since The Birds of British Columbia was published in 2001. It is most widely distributed and likely to be found breeding in Black Spruce (Picea mariana) bogs and swamps in the Fort Nelson River lowlands of the Taiga Plains Ecoprovince, which supports the provincial centre of abundance as noted in Campbell et al. (2001). The Palm Warbler is more sparsely distributed and less frequently found in the Boreal Plains Ecoprovince. In British Columbia, it occurs almost exclusively in the Boreal White and Black Spruce Biogeoclimatic Zone. The Palm Warbler is very much a bird of lower elevations, with 95% of individuals found at or below 750 m.

Unlike many other warbler species, the Palm Warbler specializes in feeding on the ground or in low-lying vegetation (Wilson 2013). It is the only warbler species that is likely to use bogs and muskegs for breeding, and is a common occupant of these habitats across the Boreal Forest.

Conservation and Recommendations Breeding Bird Survey data show the overall population has undergone a long-term moderate increase and there have historically been no conservation concerns (Environment Canada 2011, 2014). The Palm Warbler is generally tolerant of humans and human-modified habitats on its wintering grounds. On the breeding grounds, threats include peat harvesting, as well as habitat fragmentation through forestry, oil and gas development and associated linear features which may lead to increased nest predation by species like the Common Grackle (Wilson 2013), or nest parasitism by the Brown-headed Cowbird. Research into these effects is just beginning, however, partly due to the fact that Palm Warbler nests are found in habitat that until recently had been difficult to access. More research could usefully address breeding ecology and threats from the above changes to northeastern British Columbian habitats.