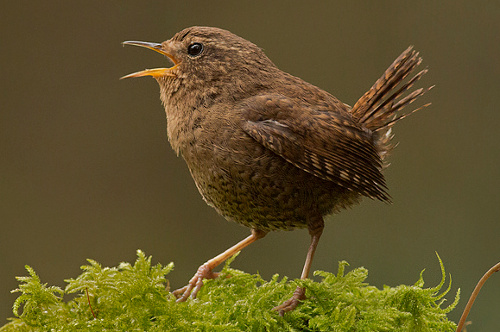 Characteristics and Range The Pacific Wren, one of our smallest songbirds, never fails to impress when it sings its astonishingly loud, long and complex song. Even more impressive is that it has been estimated that a male may have a repertoire of over one hundred songs (Van Horne 1995). This song is a familiar sound in many of British Columbia's forests. The Pacific Wren was recently split from the similar Winter Wren, which replaces it from northeastern British Columbia across eastern North America. A narrow area of overlap in British Columbia was important in the study that separated the two species due to differences in song types and appearance (Toews and Irwin 2008). Pacific Wren songs are higher pitched and more staccato than those of the Winter Wren. The Pacific Wren's range extends from coastal Alaska south to southern California, and east through the Rocky Mountains (Toews and Irwin 2012).

Distribution, Abundance, and Habitat The Pacific Wren is widespread across southern and central British Columbia except on the driest interior plateaus. Our knowledge of the species' range in northern British Columbia is improved by the Atlas, and the northeastern extent of the range in British Columbia clarified to reach its limit in the eastern foothills of the Rocky Mountains adjacent to the Peace River lowlands, where it overlaps with Winter Wren (Toews and Irwin 2008). Records of Pacific or Winter Wren reported to the Atlas without sufficiently robust supporting identification information are omitted from the Atlas. In the aforementioned zone of overlap, records with doubt regarding the identification of the wren species were omitted from analyses, but are available in the Atlas dataset.

Probability of Observation and Atlas point count data show the main centre of abundance is in the Coast and Mountains Ecoprovince, including island systems, and secondarily the Georgia Depression, where Campbell et al. (1997) indicated that the highest numbers of Pacific (then Winter) Wren occurred. Other areas of moderate abundance based on Atlas data include wetter areas of the Sub-Boreal Interior and Southern Interior Mountains ecoprovinces.

In most of British Columbia it is a widespread inhabitant of most forests, particularly older and moister forest types, especially in the Coastal Western Hemlock biogeoclimatic zone. The species is most abundant at lower elevations (below 250 m), also a finding of Waterhouse et al. (2002a). In drier parts of British Columbia the species is found in riparian forests.

Conservation and Recommendations This species is at its highest densities in wetter and older forests with considerable structure in terms of logs, snags and debris on the forest floor. Some studies indicate that younger forest stands can be useful to the species where these characters are retained or created (Waterhouse et al. 2002b). Harvested forest stands are less suitable (Bryant et al. 1993, Waterhouse and Harestad 2002). British Columbia has a high global responsibility for this species and guidelines for forest operations for this species that have been developed elsewhere (Altman 1999, 2005) should be evaluated for use in this province.