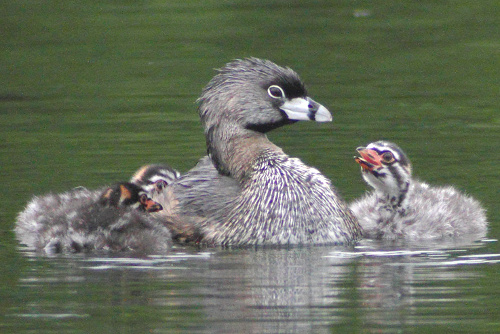 Characteristics and Range Few who explore our wetlands have not enjoyed the grunts and barkings of this cryptic grebe from deep within the reeds of British Columbia's marshes, ponds, and lakes. Although often hidden amongst the vegetation during the breeding season, its thick white bill with a black band makes identification easy when seen. The Pied-billed Grebe's widespread distribution spans the southern Boreal Forest from British Columbia to the Atlantic and south through much of North, Central and parts of South America and the Caribbean. Northern breeding populations migrate short to medium distances to winter in coastal and more southerly regions (Muller and Storer 1999).

Distribution, Abundance, and Habitat The Pied-billed Grebe is a widely-distributed breeder in the southern half of the province but restricted to areas east of the Rocky Mountains in the north. The breeding distribution during the Atlas survey period was very similar to when The Birds of British Columbia was published in 1990, but the Atlas records confirmed breeding farther northwest than was previously known, in the Liard River basin of the Northern Boreal Mountains Ecoprovince.

The probability of observing a Pied-billed Grebe is generally low, with highest values in the Southern Interior Ecoprovince followed closely by the Georgia Depression, Taiga Plains and Central Interior ecoprovinces, corresponding with the main clusters of breeding records. Most breeding in the interior is in valley bottom and lower plateau wetlands between 500 and 1,250 m elevation. The highest abundance based on point counts was found in the Southern Interior Mountains Ecoprovince, in the wetlands of the Southern Rocky Mountain Trench; however, randomised point counts do not sample the restricted wetland habitats of this grebe well. Campbell et al. (1990) note the centre of breeding abundance was across the southern interior, which the Atlas data shows is still the case.

Pied-billed Grebes nest on freshwater ponds or lake margins on floating platforms placed atop the water in depths varying from 20 cm to 2 m. Nests are generally attached to emergent vegetation such as bulrush (Scirpus) species or Cattail (Typha latifolia). Nests have also been found amongst water lilies (Nuphar) species and attached to shrubs. Often, the nest site is in the open surrounded by dense patches of vegetation (Campbell et al. 1990).

Conservation and Recommendations Pied-billed Grebes are not of conservation concern in British Columbia and are generally considered to be stable over the long-term (Environment Canada 2011). As with many species, maintaining healthy, productive wetlands for reproduction is key to the survival of this grebe, particularly the remaining uncompromised valley bottom wetlands in the southern interior. Populations may fluctuate over periods of years and, in some drier parts of the province, the availability of wetlands during drier years may influence grebe numbers. The influence of aquatic recreation and power boats on breeding lakes should be monitored for possible wave action and disturbance impacts on nests.