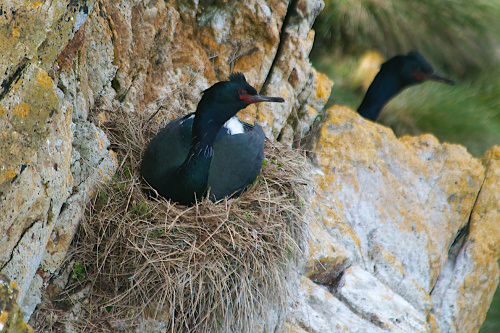 Characteristics and Range The Pelagic Cormorant is the smallest, most abundant, and most widely distributed of the three species of cormorants that breed along the British Columbia coast. A year-round resident of British Columbia's inshore waters, this species breeds from Baja California in the south to the Chukchi Sea in the north and across the North Pacific to southern China (Hobson 2013). A cliff-nesting, foot-propelled diver, it feeds in shallow water on bottom-dwelling invertebrates and fish. The Pelagic Cormorant can be encountered throughout the year in inshore waters virtually anywhere off the British Columbia coast. Two subspecies occur in British Columbia: P. p. pelagicus, which breeds on Haida Gwaii, and P. p. resplendens, which breeds throughout the rest of the province.

Distribution, Abundance, and Habitat Breeding colonies are widely distributed wherever suitable cliff habitat is found. The Atlas results show the centre of the species' breeding distribution in British Columbia continues to be the Strait of Georgia and along the west coast of Vancouver Island. However, comparison of Atlas results with earlier surveys (Campbell et al. 1990) suggests that the number of breeding colonies in British Columbia has declined, notably in Haida Gwaii. Breeding was not confirmed at Solander Island, a remote site off the northwestern coast of Vancouver Island, which supported over 400 breeding pairs in 1976 (Campbell et al. 1990).

Cormorants are notoriously difficult to census, because unlike most colonial seabirds, breeding colonies can be very small (a few pairs), often on remote islands, and their locations can shift from one year to the next. Breeding colonies consisting of a few to several hundred pairs were recorded during the Atlas surveys. The largest colonies were located at Mandarte Island, Mitlenatch Island, and Burrard Inlet Second Narrows Bridge (all >200 birds); one, at Triangle Island, exceeded 300 pairs (Rodway et al. 2011).

The Pelagic Cormorant is restricted to shallow, inshore waters in all seasons. Nests are constructed on steep cliff faces, and sometimes out of sight in large caves or crevasses, on vegetated or rocky islands. Vulnerable to disturbance and predation from Bald Eagles, Pelagic Cormorants often gain protection from eagles by nesting in association with Peregrine Falcons which aggressively defend their territories from the eagles. Large numbers breed under bridges in Vancouver, probably because these structures afford a degree of protection from eagles (Hipfner et al. 2012).

Conservation and Recommendations Recent surveys during the breeding season suggest that the species has declined in the core of its British Columbia range. The Pelagic Cormorant is potentially vulnerable to oil spills, entanglement in fishing nets, and marine contaminants (Harris et al. 2005). It is also vulnerable to disturbance from humans (Chatwin et al. 2013), and especially Bald Eagles, which predate adult and nestling cormorants and also facilitate predation of cormorant nests by other species (gulls, corvids) by forcing adults to temporarily abandon nests (Hipfner et al. 2012). The subspecies P. p. pelagicus is Red-Listed by the province; confirming whether declines have occurred, and investigating where the breeding colonies of this subspecies disperse to in winter would assist management efforts.