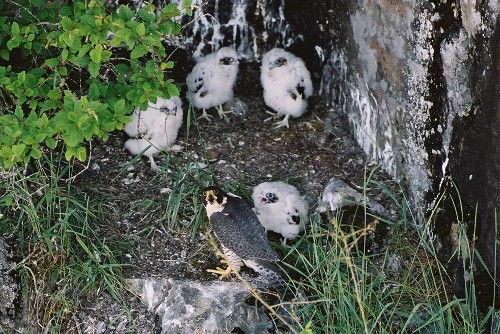 Characteristics and Range Arguably the most recognized raptor in the world, this black-helmeted, crow-sized falcon is the fastest living creature on the planet having been recorded stooping at over 320 km per hour. It was once known as the "duck hawk" as it often hunts birds over wetlands and is capable of taking species as large as ducks. Three subspecies occur in British Columbia, but only two breed here, the large, dark, resident coastal F. p. pealei, and the smaller, migratory, inland F. p. anatum; the Arctic-breeding F. p. tundrius is a rare migrant (Campbell et al. 1990). The Peregrine Falcon has a cosmopolitan distribution, occurring on all continents other than Antarctica.

Distribution, Abundance, and Habitat Most coastal birds nest on Haida Gwaii, the Scott Islands and northern Vancouver Island; lower numbers breed on other offshore islands, along the mainland coast, and farther south on Vancouver Island. The inland subspecies has recovered from believed extirpation, and now occurs in small numbers throughout much of the interior and along the Fraser River to the coast (Chutter 2011). The Strait of Georgia-Gulf Islands area is a zone of intergrade where unpublished DNA evidence shows the two subspecies interbreed.

In 2010, standardized surveys conducted every five years by the British Columbia Wildlife Branch in conjunction with the national Canada-wide survey found 154 occupied sites in British Columbia, the most since surveys began in the 1960s. Of these, 118 were of the coastal subspecies, 17 of the interior subspecies, and 19 were from the intergrade zone (Chutter 2011). Atlas surveyors found probable or confirmed breeding in some additional 10-km squares, mostly in southern British Columbia, and mostly in areas covered by the five-year provincial surveys. It is not known how many of these represent new sites, alternate sites, or birds observed away from their eyries, but undoubtedly some represent additional sites to the 2010 provincial survey. Of particular note was the discovery of an active eyrie on the Interior Plateau, which extends the confirmed breeding range significantly north in British Columbia's interior.

Peregrine Falcons nest on cliff ledges, usually beside water, either along the coast, or beside larger rivers, lakes, and wetlands. They occasionally nest in abandoned Bald Eagle nests on offshore islands and on bridges in the Greater Vancouver area; to-date, none have been found nesting on high-rise buildings, as occurs in some other jurisdictions.

Conservation and Recommendations The rapid decline of the Peregrine Falcon over most of their cosmopolitan range from the 1950s-1970s spearheaded the global movement against DDT and other pesticides. In British Columbia, the coastal subspecies did not suffer declines, but the interior subspecies was considered extirpated by the 1970s. Both F. p. anatum and F. p. tundrius were designated as nationally Endangered by COSEWIC in 1978. Subsequent population recovery through reintroductions and natural productivity increases resulted in down-listing to Special Concern (COSEWIC 2007).

In British Columbia, the coastal subspecies remains Blue-listed because of its small population, and the interior subspecies remains Red-listed as numbers are still low. Limited capture of migrating first year coastal birds for falconry re-opened in 2008, but to-date, none have been taken. Only experienced resident falconers are permitted to capture wild Peregrine Falcons; export of wild birds is not allowed. Continuation of the five-year survey program and periodic review of each subspecies conservation status is recommended.