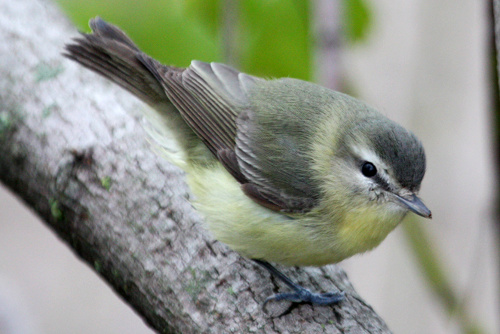 Characteristics and Range The Philadelphia Vireo has a limited range, and is relatively little-known in British Columbia. Its song is quite similar to that of the Red-eyed Vireo, and it can be hard to identify unless the bird is seen. The breeding range extends across the Boreal Forest from its westernmost extent in northeastern British Columbia and the extreme southeastern Yukon (Sinclair et al. 2003) east to the Atlantic Coast. It is a long-distance migrant that spends the winter in Central and northern South America.

Distribution, Abundance, and Habitat In British Columbia, the Philadelphia Vireo breeds almost exclusively in the northeastern plains, extending westward to the foothills of the Rocky Mountains and the Liard River drainage to the north. The distribution appears to extend farther west than that shown by Campbell et al. (1997); this may be the result of more comprehensive sampling rather than any actual change in the range. However, the Atlas does fill distribution gaps across the known range, especially in the Taiga Plains.

The Probability of Observation values are higher in the Taiga Plains than in the Boreal Plains Ecoprovince. A similar, higher pattern of abundance, at least locally in the Taiga Plains is suggested by the very small sample of point counts. Campbell et al. (1997) considered it most numerous in the Boreal Plains. Nearly all occurrences fall between altitudes of 250 and 1000 m, but there is no discernible elevation preference within this range.

The habitat preferred by this species appears to be mainly deciduous stands dominated by Trembling Aspen (Populus tremuloides) or Balsam Poplar (Populus balsamifera), and occasionally mixed stands of White Spruce (Picea glauca) and deciduous trees. Various ages of stands are used, from pole stage to mature forest, and stands of deciduous trees mixed with tall shrubs are also sometimes used.

Conservation and Recommendations The Breeding Bird Survey indicates a stable long-term population trend for this species at the continental level. Data from western boreal regions indicate a significant long-term increase (Sauer et al. 2014). Concern has been expressed about the possible impact on this species of widespread harvesting of mature Trembling Aspen in northeastern British Columbia, but so far there is no evidence of a population decline.