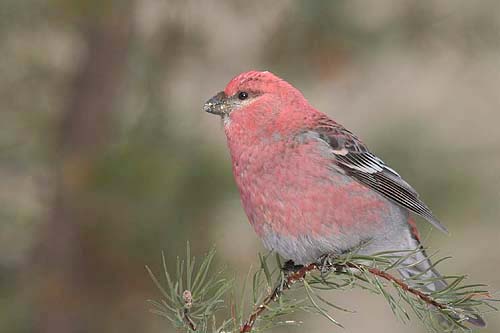 Characteristics and Range This large, approachable finch is a welcome sight in mountain forests. The Pine Grosbeak is found in subarctic, boreal and montane forests throughout the Northern Hemisphere, including much of northern Eurasia. In North America, it breeds in boreal and taiga forests from western Alaska to the Atlantic Coast, and in montane forests stretching south into the Cascade and southern Rocky mountains. West of the continental divide, it is mainly an altitudinal migrant that winters within or close to its breeding range, whereas populations farther east undergo occasional irruptions, presumably triggered by food availability, to areas well outside of the breeding range (Adkisson 1999). The endemic subspecies P. e. carlottae is the smallest and darkest, and breeds only on Haida Gwaii, and possibly on northern Vancouver Island and the adjacent mainland coast (Campbell et al. 2001).

Distribution, Abundance, and Habitat The Pine Grosbeak breeds throughout most of British Columbia, especially in the interior. Campbell et al. (2001) noted that the breeding distribution was poorly known, with breeding confirmed at only three locations, on Haida Gwaii and in the southeast. The Atlas greatly expands the confirmed breeding distribution throughout the province, including on northern Vancouver Island; this is likely due to increased effort.

The greatest Probability of Observation is in the Northern Boreal Mountains and Sub-Boreal Interior ecoprovinces. Atlas point count data show that abundance is highest above 1,500 m, and increases with increasing elevation. The data also indicate that the Pine Grosbeak is as common in these northern regions as in the Southern Interior Mountains ecoprovince where The Birds of British Columbia considered it to be most numerous. Note that at high elevations, Atlas point count sample sizes were generally low and survey effort was restricted to relatively few, widely scattered areas.

Preferred habitat, corroborated by Atlas abundance data for biogeoclimatic zones, is open coniferous forest, mainly relatively remote subalpine and northern forests and parklands dominated by Mountain Hemlock (Tsuga mertensiana), Subalpine Fir (Abies lasiocarpa), White Spruce (Picea glauca) and Engelmann Spruce (Picea engelmanni), which makes nest-finding difficult; only one nest with eggs was confirmed during the Atlas, close to the northern coast. Most breeding is above about 1,500 m, but occurs down to about 500 m near the coast. On Haida Gwaii, breeding occurs in lower-elevation Western Hemlock (Tsuga heterophylla) and Sitka Spruce (Picea sitchensis) forests.

Conservation and Recommendations Collisions with moving cars are a common source of mortality of Pine Grosbeaks in winter because they are attracted to roads by sand and salt, especially when the surrounding ground is covered by snow. Deforestation in northern Finland has drastically decreased populations; no information is available from North America, but similar effects may be expected where clear cutting is occurring on a large scale (Adkisson 1999). Assessment should be made of its population status in those places most likely to suffer from large-scale deforestation, particularly within the subspecies P. e. carlottae's breeding range, on Haida Gwaii and possibly northern Vancouver Island. This subspecies is provincially Blue-listed due to its restricted range and should be considered for listing as Identified Wildlife under the Forest & Range Practices Act (Zevit 2010).