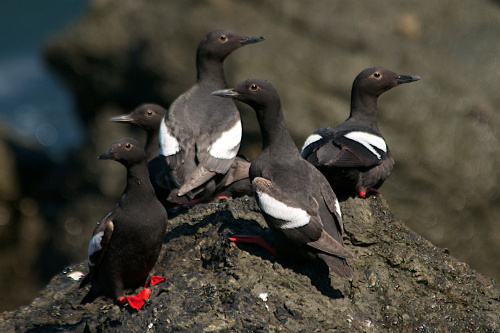 Characteristics and Range A widely distributed North Pacific auk, the Pigeon Guillemot is a common, year-round resident of rocky shorelines and nearshore waters along the British Columbia coast. Its global breeding range extends from central California to northern Alaska, and west through the Aleutian Islands to Asia (Ewins 1993). This medium-sized, highly vocal, crevice-nesting species is unmistakable in breeding plumage, with its all-black body, bright red legs and mouth lining, and distinctive white wing patches.

Distribution, Abundance, and Habitat The Pigeon Guillemot breeds in generally small, loose colonies on rocky islets and islands virtually anywhere along the British Columbia coastline (Campbell et al. 1990). There is little to indicate that the distribution of the species changed appreciably between publication of The Birds of British Columbia in 1990 and the Atlas.

The Probability of Observation model shows the Pigeon Guillemot is most likely to be encountered in more sheltered coastal waters of Haida Gwaii, the central and north coasts, where most of the larger breeding populations have been documented (IBA Canada 2015). The largest colonies documented by the Atlas surveys (150-400 birds) were around Dundas Island in Chatham Sound; colonies of at least 40 nests or 100 birds were noted in the Salish Sea on Mitlenatch Island, Mandarte Island and Race Rocks.

The Pigeon Guillemot occupies rocky shorelines and headlands that offer suitable habitat for nesting and are close to areas that supply good inshore feeding opportunities for its generalist diet of benthic fish and invertebrates. It nests in small crevices in rock and log piles, talus slopes, and on cliffs (Gaston and Jones 1998), and locally in man-made structures such as wharves (Davidson et coll. 2010). It forages mainly over reefs and shoals in shallow, protected inshore waters.

Conservation and Recommendations Pigeon Guillemots are vulnerable to human disturbance, oiling at sea, fisheries operations, and introduced mammalian predators. In British Columbia, mercury levels were found to be high in this species relative to other seabirds (Noble and Elliott 1986). Breeding population trend data are scant and unreliable, but non-breeding populations in the Georgia Depression Ecoprovince and wider Salish Sea are increasing (Crewe et al. 2012, Vilchis et al. 2015).