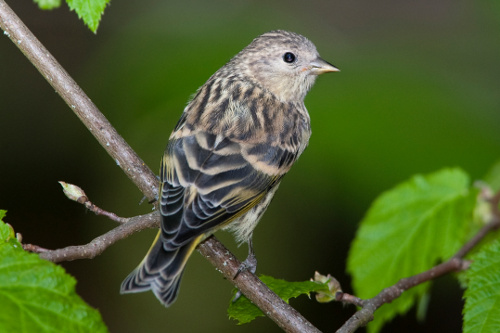 Characteristics and Range These cheery energetic birds fly in a weaving wave as they dip down to feed upside-down on seeds then swing away - bright balls of energy in the dead of winter. Pine Siskins are small and striped, whitish underneath and darker above, with yellow wing-bars and yellow tail-streaks. They often nest within a few metres of each other and forage in small flocks. They breed across North America's Boreal Forest and south through the montane forests of the western cordilleras, and winter in their breeding range and irregularly across central North America (Environment Canada 2014). They are nomadic and move around in response to the availability of seeds.

Distribution, Abundance, and Habitat Pine Siskins are the most widespread and abundant of the small finches in British Columbia. They nest at most elevations and in most ecozones. The densest clusters of confirmed nesting records occurred in the Georgia Depression, Southern Interior and the Southern Interior Mountains ecoprovinces. Nests are well hidden, so confirmation of breeding requires careful observation. Breeding records varied greatly over the five years of the Atlas surveys, e.g., on Haida Gwaii they were recorded feeding fledged young in only one of the five breeding seasons.

Pine Siskins are generalist seed eaters; they are common in most coniferous forest types and in mixed deciduous forest, being especially fond of alder catkins in spring. They also feed on wildflower seeds in weedy fields and grass verges. During irruptive years, driven by a lack of food, they will come to feeders, even during the nesting season (Dawson 2014). Flocks numbering in the thousands roam throughout British Columbia; high numbers coincide with healthy wild seed crops, which if large enough will sustain a breeding cycle.

Conservation and Recommendations Pine Siskin population trends are hard to assess because they are so nomadic, but Breeding Bird Survey and Christmas Bird Count data suggest a long-term decline (Environment Canada 2011). The bird's unfortunate fondness for salt and sand on roads in winter (to supplement mineral intake and aid digestion) leads to many deaths from automobile collisions and potentially sodium poisoning (Brown 2013, Ehrlich et al. 1988). Tens of thousands of siskins were estimated to have died on Highway 16 through the Coast Mountains in January 2014 (M. Hearne pers. obs.). This is also an issue for other finches, and there is an urgent need to determine whether or not the use of salt contributes significantly to annual finch mortality and, if so, to develop alternate methods of de-icing highways.