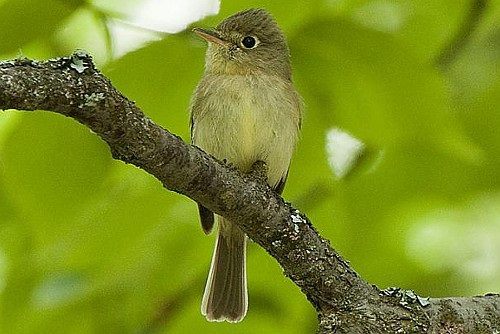 Characteristics and Range In 1989, the species formerly known as the Western Flycatcher was split in two: the current species, and the Cordilleran Flycatcher Empidonax occidentalis (Monroe et al. 1989). The two forms are almost indistinguishable in appearance and are best identified by vocalizations; both the song and the male "position note" are distinctive in pure populations. Although the Cordilleran Flycatcher was originally believed to be present in interior British Columbia, subsequent research has shown that populations east of the Coast and Cascade mountains are intermediate between the two taxa, both in vocalizations and in genetic characteristics (Rush et al. 2009). This research has thrown into question the validity of the two species currently recognized. Because there appear to be no populations in British Columbia that are unequivocally Cordilleran Flycatchers, we will discuss all "Western Flycatchers" in the province under Pacific-slope Flycatcher. The Western Flycatcher complex as a whole breeds in a band down the Pacific Coast from southeastern Alaska to Mexico, and in the interior western cordilleras. The winter range is almost entirely in Mexico.

Distribution, Abundance, and Habitat This species breeds through much of British Columbia, being especially widespread along the coast. It is rather more sparsely distributed east of the Coast and Cascade Mountains, as far north as the Liard River drainage. Campbell et al. (1997) describe its northward and eastward spread through the interior of British Columbia. As of 1997, there was only one record in British Columbia north of a line connecting the Nass River valley on the coast with the Peace River in the interior, around 56°N, and it had not yet been recorded in the Yukon as of 2003 (Sinclair et al. 2003). The Atlas documents the continuing northward range expansion of this species.

The Probability of Observation model and abundance values for this species are highest, by far, in the Georgia Depression and Coast and Mountains ecoprovinces, especially Vancouver Island and Haida Gwaii, which continue to support the core of the provincial population, as noted in Campbell et al. (1997). The elevation plot shows that not only is it far more common, but the vast majority of point count records are at altitudes of 250 m or less, although in the Rocky Mountains in the Southern Interior Mountains Ecoprovince it is recorded up to 1620 m.

In coastal regions of British Columbia, the Pacific-slope Flycatcher prefers mature and old-growth coniferous and mixed forests with an open understory. East of the Coast and Cascade Mountains, the species is usually found close to water, either in moist forests (Douglas-fir Pseudotsuga menziesii, Western Redcedar Thuja plicata, or Western Hemlock Tsuga heterophylla) or well-treed gardens along lakeshores; or in shady, mossy canyons in a variety of forested and unforested habitats. The mossy nests are placed on ledges on vertical surfaces, both natural, e.g., upturned root mats, rock cliffs, river banks, or man-made, e.g., exterior walls of buildings, road banks, bridge girders (Lowther 2000).

Conservation and Recommendations Breeding Bird Survey analyses combine data for Pacific-slope and Cordilleran Flycatchers. Continent-wide data show a long-term declining trend (Sauer et al. 2014). In British Columbia, however, it is stable or increasing. No conservation concerns have been noted for this species either in Canada or in the United States.