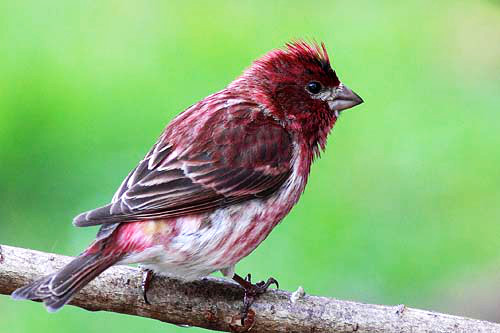 Characteristics and Range The male of this attractive finch is characterized by his melodious warbling song and raspberry-red colour. The female's pale supercilium above a dark cheek distinguishes her from the female House Finch, while the unstreaked vent separates her from the very similar Cassin's Finch. The Purple Finch's breeding range spans northern North America roughly coincident with the southern Boreal Forest and including, in the east, the boreal-hardwood transition; in the west, it extends south through the Pacific coastal forests to northern Mexico. This bird winters within the southern parts of its breeding range and across most of eastern North America (Wootton 1996).

Distribution, Abundance, and Habitat Purple Finch breeding records are concentrated in five ecoprovinces: Georgia Depression, Central Interior, Sub-Boreal Interior, Boreal Plains, and Taiga Plains. Comparison with The Birds of British Columbia shows that in the latter four areas, the Atlas data indicates local range extensions and increases in density of breeding records, while range contractions are evident in the southern part of the Southern Interior Mountains Ecoprovince, and on northern Vancouver Island.

Atlas abundance and Probability of Observation information shows that this species is most abundant in the Georgia Depression Ecoprovince at relatively low elevations within the Coastal Douglas-fir biogeoclimatic zone. Other areas where high Pobs values and moderate abundance coincide are: the southern Nechako and northern Fraser plateaus in the Sub-Boreal Interior and Central Interior ecoprovinces, possibly reflecting favourable modification or succession of habitat due to forestry practices; and the northern Taiga Plains (near Liard River) and southern Boreal Plains (Peace River lowlands) ecoprovinces, perhaps related to forestry and farming practices respectively. Elsewhere, the Purple Finch is sparsely distributed, and indeed is entirely absent from large parts of the Coast and Mountains Ecoprovince. In most of the southern Interior of British Columbia, it is replaced by the Cassin's Finch.

This is a bird of cool, moist, coniferous and mixed forests with brushy understory. It nests in open woodlands and in forest stands with openings or edges, such as lake and river shorelines, the margins of wetlands, and clear-cuts. It also uses human habitats (although less so than the House Finch), nesting in coniferous trees in hedgerows and farmland, along power lines and roadsides, and in well-treed residential areas.

Conservation and Recommendations Breeding Bird Surveys indicate that the Purple Finch population may be stable in British Columbia, but is undergoing a gradual long-term decline across Canada. Although not classified as threatened, the population may be vulnerable to competition from House Finch, which is blamed for a previous major decline in eastern Canada and the U.S. (Wootton 1996). Forestry practices may be of long term significance: habitat is eliminated by large clear-cuts, but may be improved by small clear-cuts and partial retention/selective logging (Lance and Phinney 2001). Conservation of mature Douglas-fir habitat in the Georgia Depression Ecoprovince will benefit the species. Atlas data contributed to the recent provincial reassessment of the species as "of possible conservation concern"; continued monitoring should aim to clarify the recent distribution changes suggested by the Atlas records.