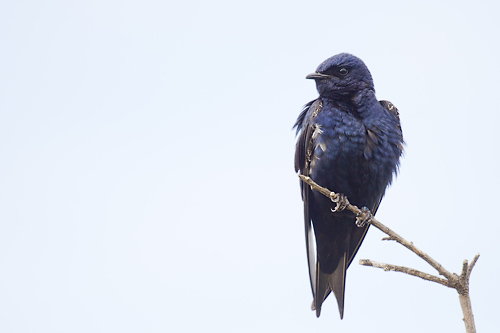 Characteristics and Range This charismatic, large swallow has developed an extraordinary close association with humans in many parts of its North American breeding range. By 1900, the "eastern" subspecies P. s. subis east of the Rocky Mountains had abandoned tree cavities for artificial housing close to human habitation (Tarof and Brown 2013). The separate "western" subspecies P. s. arboricola (Behle 1968) west of the Rocky Mountains first used nest boxes in 1975, but still uses natural cavities in some parts of its range spanning southwestern British Columbia to southern California. By 1985, it was nearly extirpated from British Columbia as the coastal pilings it used for nest sites decayed and were replaced with creosote-treated pilings, but has recovered in response to provision of single nest boxes on the marine foreshore (Fraser et al. 1997, Cousens et al. 2005, Cousens and Lee 2012). Purple Martins are long-distance migrants, overwintering in the lowlands east of the Andes in South America; British Columbian breeders winter separately from the eastern birds, in southeastern Brazil (Fraser et al. 2012).

Distribution, Abundance, and Habitat In British Columbia, the Purple Martin's distribution is limited by breeding season length at the northern limit of its ancestral range, at low elevations in the Georgia Depression Ecoprovince (Cousens and Lee 2012, Campbell et al. 1997). Distribution within this range increased substantially during the Atlas period in response to conservation efforts, with confirmed breeding at many new locations on Vancouver Island, the Gulf Islands and the Sunshine Coast. In 2014, a total of 1,060 pairs nested at 74 marine and 6 freshwater sites, an increase of 110 pairs and 12 sites from 2013; the breeding range now extends to Barkley Sound and the Broughton Archipelago in the Coast and Mountains Ecoprovince (Western Purple Martin Foundation 2014).

Most breeding occurs over water, in nest boxes sited in clusters, usually on pilings in bays, major rivers and estuaries. These mimic formerly used natural cavities in snags close to water or in burned-over forest areas, which have declined. They returned to use piling cavities and nest boxes at inland freshwater sites in 2012-13, for the first time in 40-50 years. The clustering of multiple boxes in one location minimizes the impact of competing invasive European Starlings that may usurp one box in a cluster early in the season. Competing colonial House Sparrows require additional ongoing control effort (Cousens and Lee 2012).

Conservation and Recommendations The recovery of the western Purple Martin in British Columbia from just five known pairs in 1985 is largely due to a volunteer initiative, coordinated since 2002 by the British Columbia Purple Martin Stewardship and Recovery Program (Cousens et al. 2004). British Columbia now supports about 15% of the 12,000-15,000 breeding western Purple Martin population; the British Columbia population maintains high genetic diversity through in-migration from west coast source populations (Baker et al. 2008). In British Columbia, martins appear to be limited by natural nesting habitat availability, competition for nest sites from introduced House Sparrow and European Starlings, provision and protection of artificial nest sites, and adverse weather impacts on food availability that directly affects fledging success (Cousens and Lee 2012). Intensive use of insecticides in agricultural areas is a growing concern, because of potential indirect impacts to insects that constitute the martin's diet (Airola et al. 2015).

Acknowledgements We acknowledge the efforts of the great many volunteers and conservation groups, program sponsors and donors over the past three decades who have made recovery of the western Purple Martin in British Columbia possible, and thank them for their participation.