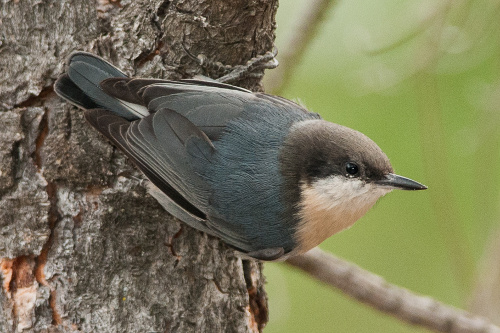 Characteristics and Range This small, social, and vocal nuthatch is easily distinguished from other nuthatches in British Columbia by its small size, brownish-grey crown, buffy underparts, and constant twittering chatter that frequently draws attention to its presence. During the winter, family groups often combine into expanded flocks. Their social nature extends into the breeding season, and they are one of only two species of cooperatively breeding nuthatches (Kingery and Ghalambor 2001). It is resident across mountainous western North America, from southern British Columbia to central Mexico. Its range is closely tied to Ponderosa Pine (Pinus ponderosa) and other similar species, which creates a patchy distribution across this area (Kingery and Ghalambor 2001, Campbell et al. 1997).

Distribution, Abundance, and Habitat The Pygmy Nuthatch is a resident of British Columbia's drier southern valleys. The Atlas maps a similar breeding distribution to The Birds of British Columbia, almost entirely confined to the Ponderosa Pine biogeoclimatic zone in the Southern Interior Ecoprovince. There are no Atlas records from the southern Rocky Mountain Trench, where a few breeding season records were documented by Campbell et al. (1997).

The Probability of Observation model indicates that the Pygmy Nuthatch is most likely to be found in the Okanagan and Similkameen valleys, with moderate Pobs values in the Thompson, Nicola, Fraser, and Kettle valleys. The restricted distribution was further highlighted by the low number of point counts recording the bird, all of which were in Ponderosa Pine and immediately adjacent Interior Douglas-fir or Bunchgrass biogeoclimatic zones.

This species is tightly associated with Ponderosa Pine in British Columbia, and nests only in areas where it is present, whether as pure stands, or mixed with Douglas-fir (Pseudotsuga menziesii) and Western Larch (Larix occidentalis). Within this habitat, it was most common between 300 and 750 m elevation, above which abundance dropped off dramatically, although birds occur up to 1,370 m (Campbell et al. 1997).

Conservation and Recommendations This species is largely dependent on mature and old growth Ponderosa Pine forest. This habitat has been heavily affected by logging, the recent Mountain Pine Beetle (Dendroctonus ponderosae) outbreak, and local residential development (Klenner et al. 2008, Kingery and Ghalambor 2001). Habitat loss may continue into the future, with additional losses from mountain pine beetle and catastrophic forest fires; however, this may be countered by an increase in the Ponderosa Pine biogeoclimatic zone due to warmer, drier conditions (Hamann and Wang 2006 , Flannigan and van Wagner 1990). Conservation of forests that include mature and old growth Ponderosa Pine are encouraged and will benefit the Pygmy Nuthatch.