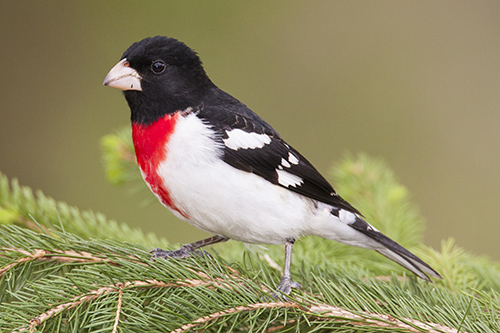 Characteristics and Range The male Rose-breasted Grosbeak is easily recognized by its bold colouring and melodic, warbling song. The more cryptically-plumaged females also sing, and both sexes are known to sing from the nest while incubating. The species breeds in temperate forests from the Atlantic coast westward to the edge of the Great Plains, and northwestward through the southern Boreal Forest to the Rocky Mountain foothills. Northeastern British Columbia and adjacent Yukon and Northwest Territories represent the northwestern-most limits of its range. It winters mainly in Central America and northern South America (Wyatt and Francis 2002).

Distribution, Abundance, and Habitat The Rose-breasted Grosbeak is found mainly east of the Rocky Mountains in northeastern British Columbia. There are also numerous records west of the Rockies, through the Northern Rocky Mountain Trench to the Interior Plateau. This is generally similar to the range described when The Birds of British Columbia was published in 2001, but distribution in the northeast seems to have expanded, while the small outlying breeding population in southern British Columbia has since vanished. Campbell et al. (2001) postulated that the increase in reports from the southern parts of British Columbia prior to 2000 may represent an element of the population that migrates along the Pacific Coast, colonising southern British Columbia. That trend seems to have dissipated, and it seems more likely that most grosbeaks found west of the Rocky Mountains during the Atlas surveys have simply followed low-elevation passes through the mountains and found suitable habitat in the British Columbia interior. Whether this pattern continues and leads to an established range expansion remains to be seen.

The Probability of Observation for the Rose-breasted Grosbeak was highest in the Boreal Plains and Taiga Plains ecoprovinces where the vast majority of breeding evidence was found. The highest Pobs values were in the Peace, Fort Nelson and Liard river lowlands, but point counts showed that it is most common in the Boreal Plains Ecoprovince, as noted by Campbell et al. (2001). It is most abundant in low elevation (250-500 m) deciduous and mixed forest habitats.

The species prefers open deciduous growth and was found in young forest, edges, and very old forest with numerous canopy gaps. It tends to avoid coniferous stands and closed-canopy forest with few shrubs in the understorey. This is generally similar to habitats used elsewhere across its breeding range (Wyatt and Francis 2002).

Conservation and Recommendations The Rose-breasted Grosbeak is not a conservation concern in British Columbia or across Canada. Canada-wide long-term Breeding Bird Survey trends indicate a moderate decline (Environment Canada 2011); however, trends in parts of the western Boreal Forest show an increase. Industrial development such as forestry and oil and gas exploration may actually improve conditions for the Rose-breasted Grosbeak considering its preference for young forest and edge habitat. If the species continues to expand into the interior of the province, contact and potential hybridization with the Black-headed Grosbeak is possible, as has happened with several other similar species pairs in post-glacial times (Cannings and Cannings 2015).