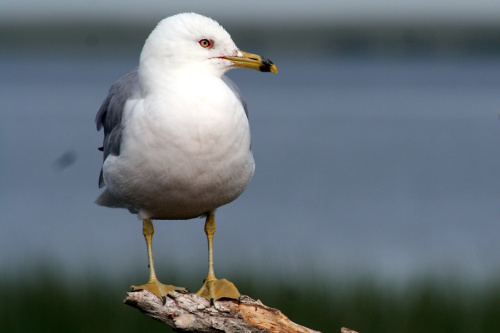 Characteristics and Range One of the smallest of the white-headed gulls, the Ring-billed Gull breeds widely on freshwater lakes across North America from the western cordilleras east across the Boreal Forest and Prairie biomes. Between 1850 and 1920 this species was almost wiped out by a combination of direct persecution for its feathers and eggs and by loss of breeding habitat due to human settlement. However, during the 1960s and 1970s it began a population "explosion" which continues in some areas today. In western North America the Ring-billed Gull has expanded its breeding population due to the advent of agriculture, the creation of reservoirs, and the proliferation of garbage dumps (Pollet et al. 2012). The Ring-billed Gull was formerly an uncommon transient across southern British Columbia (Campbell et al. 1990), but it established itself as a breeding species in the interior in the 1960s, and is now a common gull across southern parts of the province, quick to exploit garbage and human handouts at school yards, parks, and fast food outlets, and has thus become a familiar urban bird.

Distribution, Abundance, and Habitat The first Ring-billed Gull colony was documented in 1968 on Whiskey (Grant) Island on Okanagan Lake (Cannings et al. 1987). The second colony was discovered on Ellis Island on Fraser Lake in 1985 (Campbell et al. 1990). In 1989 a third colony appeared on Shuswap Lake's Christmas Island at Salmon Arm (Howie 2015), and colonies have been established more recently at Osoyoos in the South Okanagan and Dawson Creek in the Peace River lowlands.

Atlas results show that the Ring-billed Gull has continued to spread as a breeding species in the interior. In the Sub-Boreal Interior Ecoprovince, probable breeding was detected at Stuart Lake, but breeding was not confirmed at the nearby Fraser Lake colony, although birds were present. In the Southern Interior Ecoprovince, the Shuswap Lake colony numbers between 300 and 1,000 pairs depending upon seasonal water levels (Hilary 2015). Numbers were not counted at the Whiskey (Grant) Island colony. The Osoyoos colony numbered as many as 81 pairs in 1996, but is now estimated at only 41-50 pairs with no room for expansion due to construction at the Osoyoos sewage lagoons (Brown 2015). The Dawson Creek colony in the Boreal Plains Ecoprovince numbers no more than 6 nests, built on log booms at a city reservoir (Phinney 2015).

The Ring-billed Gull frequents human settlements with garbage dumps, beaches, grassy parks, school playgrounds and playing fields, fast food restaurants and parking lots near such establishments. It benefits from agriculture, foraging in crop fields for insects, worms, and mice. It requires small islands and isolated shores of wetlands for breeding.

Conservation and Recommendations Currently the status of the Ring-billed Gull in British Columbia is considered secure or even improving and is not of conservation concern. Breeding colonies can be hard to find; many of the 10-km squares with possible breeding likely reflect records of birds in potentially suitable habitat, but are worth follow-up visits in future years to document any continuation of the expansion.