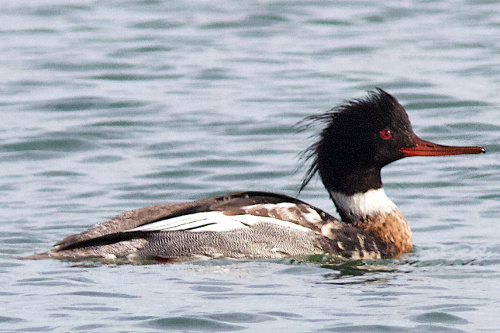 Characteristics and Range This medium-sized, fish-eating duck with its long, shaggy crest is familiar on British Columbia coasts in winter. The Red-breasted Merganser has a wide distribution in boreal forest and tundra of the Northern Hemisphere. In North America, it breeds across the Low Arctic tundra and the Boreal Forest, and winters mostly on salt water south to the Pacific Coast of Mexico and the Gulf Coast. In the Palearctic, it breeds across northern Eurasia and winters south to the Mediterranean Sea and Taiwan (Craik et al. 2015).

Distribution, Abundance, and Habitat Campbell et al. (1990) note that the Red-breasted Merganser "breeds only near Atlin Lake and on islands in Masset Inlet". The Atlas surveys expanded the confirmed and probable breeding distribution to additional locations in the Coast and Mountains and Northern Boreal Mountains ecoprovinces, and to new locations (Takla Narrows and Stuart Lake) in the Sub-Boreal Interior Ecoprovince. However, the Red-breasted Merganser remains a scarce nester in British Columbia; the Atlas records included only seven records of confirmed breeding. Most nesting is below about 750 m elevation.

Most observations during the Atlas surveys were in the Atlin Lake area in the far north and the Masset Inlet area on Haida Gwaii. Most records of confirmed breeding were in the Northern Boreal Mountains Ecoprovince. Size and trends of populations in North America are not reliably known (aerial surveys of breeding birds often do not differentiate between Common and Red-breasted mergansers, and large portions of their range are not surveyed).

Conservation and Recommendations There are few conservation concerns for this species in British Columbia. Nests near water in low-lying coastal areas, however, may be vulnerable to ongoing sea-level rise (Craik et al. 2015).