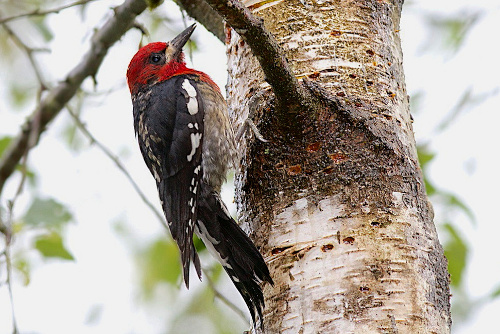 Characteristics and Range The Red-breasted Sapsucker is one of four sapsucker species, woodpeckers that regularly drill holes through bark to feed on tree sap. Sapsuckers maintain and defend extensive systems of sap wells, which other species such as the Rufous Hummingbird feed from. Three of the four sapsuckers, including the Red-breasted, are believed to have been a single species that occupied a widespread range across northern North America but became separated by the Pleistocene ice sheets, and further fragmented by geographic barriers such as the Rocky Mountains. There they evolved into separate species that have come back into contact with each other following the ice retreat. Today's distribution of the three sapsucker species is directly related to their ice age refugia. The Red-breasted Sapsucker is restricted to the Pacific biomes of western North America, where it is largely resident, making some local movements, except in interior British Columbia where the breeding population is entirely migratory (Walters et al. 2014).

Distribution, Abundance, and Habitat It was widely distributed through the Coast Mountains and on larger islands along the entire length of the province north to south, extending eastwards in a tongue across the Interior Plateau to the Rocky Mountain Trench. The Atlas confirmed breeding in three new areas since The Birds of British Columbia was published in 1990: the Stikine River catchment, along Williston Lake in the Northern Rocky Mountain Trench, and on the Cariboo Plateau. This likely reflects increased survey effort in these areas during the Atlas, but may also represent local range expansions.

Atlas Probability of Observation modelling highlighted three areas where the species was most likely to be found: on Haida Gwaii, in the Georgia Depression, and the northern Coast and Mountains ecoprovinces. Within these areas, it favoured Western Hemlock (Tsuga heterophylla) and Douglas-fir (Pseudotsuga menziesii) dominated forests at lower elevations. Abundance on point counts was highest in the Coastal Western Hemlock, Interior Cedar-Hemlock, Coastal Douglas-fir and Sub-boreal Spruce biogeoclimatic zones, and four times higher below 250 m than above that elevation.

The majority of nest cavities are excavated in deciduous trees of a wide diversity of species (Campbell et al. 1990). The bird is usually found near water bodies. Sap from a variety of coniferous and deciduous tree species is consumed; insects are an essential food source for young birds (Walters et al. 2014).

Conservation and Recommendations There are no major management concerns for the species, although it is prone to inconsistent short-term population fluctuations (Environment Canada 2011). Projected climate change scenarios will likely alter distribution of forest types in British Columbia (Hamann and Wang 2006, Pojar 2010). There is already evidence that the more aggressive Yellow-bellied Sapsucker outcompetes Red-breasted through aggression and asymmetric hybridization in drier forest types (Seneviratne et al. 2012). The trio of sapsuckers in British Columbia form hybrid zones that provide useful markers for predicting forest birds' responses to changes of climate and forest cover (Seneviratne et al. 2016), so it will be instructive for future ornithology to monitor the three sapsuckers accordingly.