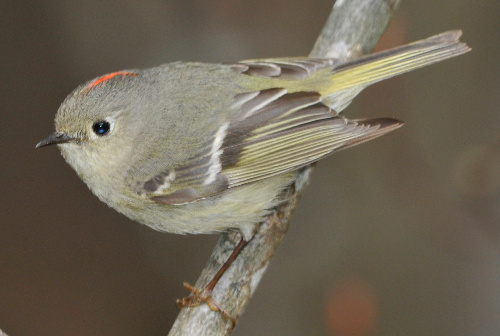 Characteristics and Range One of North America's smallest songbirds, the Ruby-crowned Kinglet is recognized for constantly flicking its wings as it moves quickly through the forest searching for food, as well as for its loud, complex song in the spring. It breeds across North America in boreal and mixed wood forests and south in montane spruce-pine forests (Swanson et al. 2008). An altitudinal and short-distance migrant, it winters in a broad arc from British Columbia across the southern, less heavily frost-affected half of North America. Two subspecies are found in British Columbia: R. c. calendula is widespread in the interior and is primarily a migrant while R. c. grinnelli is primarily sedentary on the coast but makes altitudinal movements and may show some limited southward migration in winter (Swanson et al. 2008).

Distribution, Abundance, and Habitat The Ruby-crowned Kinglet is a widespread breeder throughout British Columbia, particularly east of the Coast Mountains, but absent on Haida Gwaii. Campbell et al. (1997) noted that its breeding distribution was not well known. The Atlas greatly filled in the breeding distribution throughout the province and confirmed breeding on the coast; this was likely due to increased effort. Breeding is below about 1,200 m in coastal regions and below about 2,400 m in the interior.

The most extensive area of high Probability of Observation and the area of highest abundance are centred on the Interior Plateau in the Central Interior and Sub-Boreal Interior; Campbell et al. (1997) noted it was most numerous in these two ecoprovinces. Other areas with high Pobs values (e.g. in the Northern Boreal Mountains, Southern Interior Mountains and Taiga Plains ecoprovinces) supported lower abundance based on Atlas point counts.

Preferred breeding habitat is mixed coniferous forests from mid-elevations to timberline. The most records on point counts and the highest abundance are in the Sub-Boreal Spruce and Sub-Boreal Pine-Spruce biogeoclimatic zones. It is most common between 1,000 m and 1,750 m.

Conservation and Recommendations There are few conservation concerns for this abundant and widespread species. Populations of the Ruby-crowned Kinglet in Canada, including British Columbia, have shown little change since 1970 (Environment Canada 2011, 2014). Apparently some eastern North American populations are declining, but western North American populations are stable or increasing (Swanson et al. 2008). The causes of the declines in eastern populations are unknown but the Ruby-crowned Kinglet is known to respond to fluctuations in the abundance of spruce budworm.