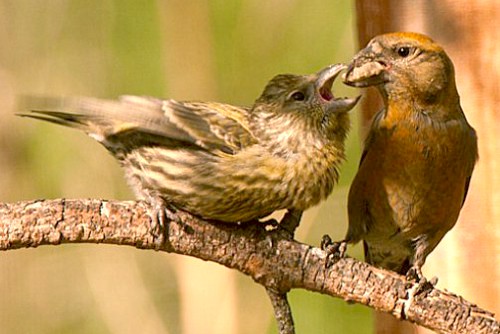 Characteristics and Range Red Crossbills fly in lively flocks, uttering strident "kip kip kip" call notes, then land in high conifers and hang like flecks of red-gold sunset as they feed on cones. Their crossed bills are an adaptation used to prize soft seeds from inside a conifer cone's hard outer shell. The Red Crossbill occurs throughout the boreal forests of North America and Eurasia, northern Africa and southern Asia (Godfrey 1986). In North America, it occurs across southern taiga and boreal forests from coast to coast, and in western montane forests south to the Mexican Sierra Madre. Eight or more nomadic populations, distinguishable by subtly different calls and bill structures, are thought to be reproductively isolated from each other, and are the subject of ongoing speciation debates among many authors (Adkisson 1996).

Distribution, Abundance, and Habitat Atlas records confirm nesting in most ecoprovinces, and add extensively to our knowledge of distribution in the northern half of the province since The Birds of British Columbia was published in 2001. Red Crossbills are nomadic and locally irruptive, and will nest at almost any time of the year based on cone availability (Environment Canada 2006). These factors, coupled with the fact that nests are well hidden, meant that despite its widespread distribution, confirmed breeding was rather seldom recorded during Atlas surveys.

The likelihood of finding Red Crossbills is highest in the Georgia Depression, and parts of the Coast and Mountains (including Haida Gwaii) and Southern Interior ecoprovinces. Highest abundance on point counts confirms these regions supported the core of the population during the Atlas period, contrasting with The Birds of British Columbia, which noted highest numbers in the Southern Interior Mountains Ecoprovince. Highest abundance on the coast occurred at low elevations (<250 m), but in the interior was at much higher elevations (1,500-1,750 m). Abundance of this species likely shifts annually depending on food availability. During the Atlas period, it did not overlap greatly with the White-winged Crossbill, except in the Liard River drainage in the far north, suggesting a rich spruce cone crop there.

Conservation and Recommendations The Red Crossbill population as a whole across Canada, and within British Columbia, appears to be stable based on Breeding Bird Survey trends, and their nomadic nature and ability to disperse very large distances means they can opportunistically exploit seasonal food resources. Implementing standard North American monitoring protocols for the Red Crossbill will help to identify the ranges and needs of the different populations whilst their systematics are resolved. Shorter rotation logging practices that do not allow conifers to mature and produce large cone crops are detrimental to Red Crossbill populations, and the different populations' degree of reliance on old-growth forests requires further research (Adkisson 1996).