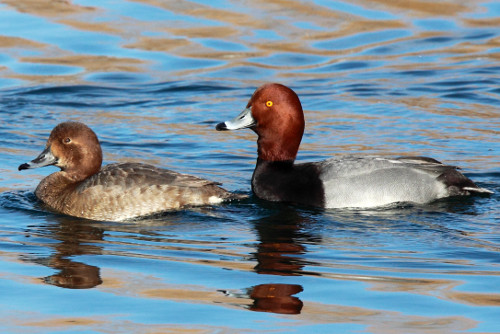 Characteristics and Range Sometimes confused with the slightly larger Canvasback, the Redhead is the more common breeder of the two species in British Columbia. Although females generally make their own nests, they have the distinction of regularly laying eggs in the nests of other Redheads or those of other species, especially their close relative the Canvasback. Restricted to North America, the Redhead breeds mainly in prairie potholes and marshes in southwestern Canada and western United States, with scattered disjunct populations elsewhere (Woodin and Michot 2002). Wintering birds are concentrated in coastal wetlands of the Gulf of Mexico, but can be found across much of much of western North America north to southern British Columbia.

Distribution, Abundance, and Habitat Breeding of Redhead is concentrated in the Central Interior, Southern Interior, Southern Interior Mountains and Boreal Plains ecoprovinces, with a few records in other interior regions. The Probability of Observation map shows a similar pattern. Redhead breeding is concentrated in the 500-1,500 m elevation range. The geographical breeding distribution and elevation range from the Atlas closely match those in The Birds of British Columbia, suggesting no major change in distribution since the 1980s.

Redheads are highly flexible in diet, foraging methods and habitat (Woodin and Michot 2002). While breeding they eat aquatic invertebrates (mainly insects and snails) and the tubers, seeds and other parts of aquatic plants. They feed by diving, upending or taking food at the surface, in a wide range of aquatic habitats, generally 1-3 m deep. Females build nests over water in dense emergent vegetation, e.g., Cattail (Typha latifolia), or bulrush (Scirpus) species, usually close to open deeper water. Around Riske Creek in British Columbia, Savard et al. (1994) found no strong indicators of habitat preferences by breeding Redheads, apart from avoidance of the shallower ponds.

Conservation and Recommendations With a widespread and large population, the Redhead is not considered to be at risk. Although widely fluctuating, the continental population of the Redhead is generally above half a million breeding birds (Woodin and Michot 2002) and has averaged over 1 million birds since 2007 (CWS Waterfowl Committee 2013). There has also been some range expansion (e.g., into Alaska) during this period (Woodin and Michot 2002). The Atlas data will be useful for tracking changes in abundance or distribution of this apparently adaptable species in British Columbia.