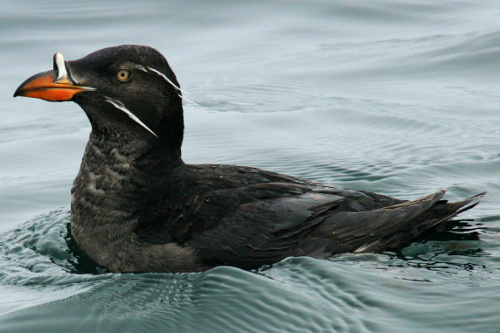 Characteristics and Range The Rhinoceros Auklet breeds across the temperate North Pacific, from California to Japan, with an estimated 50% of the global population breeding on islands in British Columbia (Gaston and Deschesne 1996). Winter distribution is poorly described, although a southerly movement is generally apparent. This medium-sized, nocturnal, burrow-nesting auk, more closely related to the puffins than the auklets, is named for the prominent "horn" that develops on top of its bill during the breeding season. A generalist feeder with mouth parts adapted for catching and holding invertebrates and fish, it pursues prey using its smallish wings for underwater propulsion.

Distribution, Abundance, and Habitat Breeding colonies occur in continental-shelf waters from the Salish Sea, along the west coast of Vancouver Island, and north to Haida Gwaii. Abundance peaks adjacent to the Central and North coasts (Campbell et al. 1990), with the largest colonies found at Pine and Storm islands in southern Queen Charlotte Sound. The species can be encountered in marine waters virtually anywhere off the British Columbia coast during the breeding season.

Breeding colonies are located mainly on remote islands that are unlikely to have human visitors. There are 8 island groups designated as Important Bird Areas in British Columbia that support breeding colonies of Rhinoceros Auklets (IBA Canada 2015); few were visited during the Atlas period, due to their remoteness. Birds are commonly encountered on the water in the vicinity of and even away from colonies; birds encountered in 10-km squares that included potential breeding habitat but no known colonies were identified as possible breeders.

The Rhinoceros Auklet breeds both on forested and non-forested islands, either under canopy or in the open. It digs nesting burrows that can be several metres long in deep, vegetated soil. The species forages mainly over the continental shelf, often in multi-species assemblages preying on sand lance and herring schools, and only rarely seaward of the shelf break.

Conservation and Recommendations British Columbia has a high global responsibility for conserving the Rhinoceros Auklet; all major colonies are afforded a high level protection in provincial ecological reserves, national parks, or conservancies. It is among the bird species most commonly caught in salmon gill-nets set off the British Columbia coast (Smith and Morgan 2005). Vulnerable to introduced predators, several colonies in British Columbia have been exterminated by Raccoons (Procyon lotor) and American Mink (Mustela vison); invasive alien predator control efforts at infected and at-risk colonies should continue. This is a sentinel species for monitoring long-term trends in marine contaminants in British Columbia (Elliott and Elliot 2013).