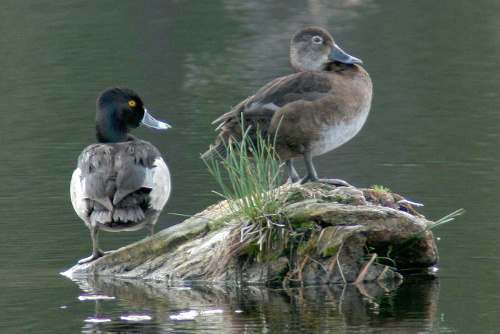 Characteristics and Range This peaked-crowned species is one of the most adaptable of the diving ducks and can be found breeding in a wide range of freshwater habitats. The Ring-necked Duck breeds in the boreal and prairie biomes across North America, and winters on the Pacific and Atlantic coasts, the Caribbean, and inland across the southern United States and Mexico (Roy et al. 2012).

Distribution, Abundance, and Habitat The Atlas showed evidence of breeding in most parts of British Columbia except the central and northern coasts, Haida Gwaii, and western Vancouver Island. In general this distribution is similar to that shown by Campbell et al. (1990), except that the Atlas confirmed breeding in the northwest (from the Skeena River north to Atlin) and showed more breeding records in the northeast. These differences might reflect increased numbers and distribution in British Columbia, given that the species' breeding range expanded into the Yukon and Alaska since the 1980s (Roy et al. 2012). The Atlas showed slightly fewer breeding sites on Vancouver Island than when The Birds of British Columbia was published, but this may simply be a reflection of the longer time period for records used in the latter publication.

The Probability of Observation map generally matched the distribution of breeding records, with the most extensive areas of highest PObs values on the mid-elevation interior plateaus, but also showed high PObs values in the Taiga Plains Ecoprovince. Although widespread and reported from all eight ecoprovinces in British Columbia, the Ring-necked Duck is not a common breeder here, and too few data were collected to draw firm conclusions on abundance. Like most waterfowl, the abundance of the Ring-necked Duck is not well sampled with randomized point counts.

Conservation and Recommendations The continental breeding population of the Ring-necked Duck has increased substantially since the 1960s and is now consistently above 1 million birds (Fast et al. 2011, CWS Waterfowl Committee 2013). Its breeding range expanded to the east and northwest during this time (Roy et al. 2012). Repeated atlassing in future years will document any future changes in range and relative densities in the province.