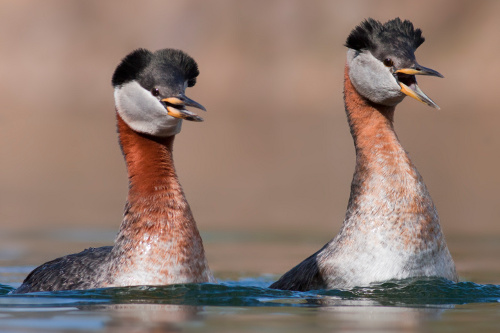 Characteristics and Range The loud, raucous calls and distinct rusty neck of this normally solitary nester are familiar to people who live near lakes throughout much of British Columbia's interior. Occasionally, loose colonies are observed. The species' breeding distribution is circumpolar at northern temperate latitudes. In North America, it spans the Boreal Forest from the Alaska Ranges to the Great Lakes, the northern Rocky Mountains, and the northern Great Plains. North American breeders chiefly winter along the Pacific and Atlantic coasts and on the Great Lakes (Stout and Nuechterlein 1999).

Distribution, Abundance, and Habitat Breeding distribution is relatively widespread across central and southern areas east of the Coast Mountains, and rather sparse across the north, except in the Peace River lowlands where it is more widespread. The breeding range during the Atlas appears to be much the same as when The Birds of British Columbia was published in 1990.

Atlas data indicate that this grebe is nowhere common, but Probability of Observation modelling suggest that it is most likely to be found in the Central Interior, southern Sub-boreal Interior, and northern extremes of the Northern Boreal Mountains and Taiga Plains ecoprovinces, and in a narrow zone in the Southern Rocky Mountain Trench. During the Atlas, the Red-necked Grebe appeared to be less frequently found in the far south-central portions of the province than indicated in Campbell et al. (1990). This wetland species is not well sampled by point counts, and too few data were collected to draw firm conclusions about abundance.

Preferred breeding habitats include shallow, freshwater lakes with ample open water to facilitate take-off (a 50-60 m running taxi distance is normal in windless conditions; Stout and Nuechterlein 1999). Nests may be anchored to either emergent or submergent vegetation and may be sheltered within plants or exposed on open water. These finer scale wetland characteristics are more important determinants of breeding than broad habitat types.

Conservation and Recommendations The Red-necked Grebe is not a bird of provincial or national conservation concern. Breeding populations may have declined in southern portions of the province. More intensive surveys and comparison with historical data (e.g. Campbell et al. 1990) for these areas is recommended.