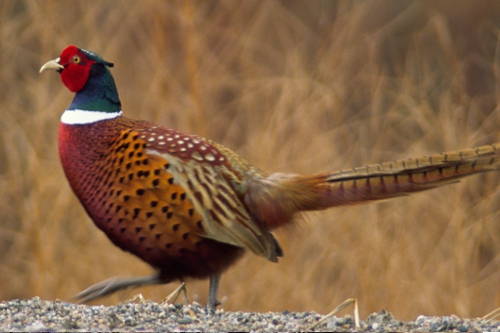 Characteristics and Range The Ring-necked Pheasant is a large, beautiful game bird native to Asia and introduced to many parts of the world, including central North America, where it has been especially successful in establishing populations in agricultural regions dominated by hay and grain production (Giudice and Ratti 2001). Most individuals in British Columbia originated in China, with a smaller number imported from England, where it is also introduced (Campbell et al. 1990). The male is a striking bird with a green hooded head, red eye patch, white neck ring, and colourful streaked body. The female is a lovely tan-coloured bird, flecked with darker brown throughout. Neither sex is likely to be confused with any other North American bird in the habitats where it occurs. Even the male's explosive, bugling cackle, often heard from cover at the edge of a field, is virtually unmistakable.

Distribution, Abundance, and Habitat In British Columbia, the Ring-necked Pheasant is distributed throughout much of the Georgia Depression and the Okanagan Valley, and isolated patches in other valleys in the southern and central interior. This distribution is largely consistent with the range known when The Birds of British Columbia was published in 1990, although some local populations have apparently been extirpated since then, including along the Thompson River.

The Probability of Observation model indicates that it more likely to be encountered locally in the valley floors of the Okanagan, Kettle and Columbia rivers and at the Fraser-Chilcotin river confluence than in the agricultural areas of the Georgia Depression. The species has reportedly declined most strongly in coastal British Columbia (Environment Canada 2014).

It inhabits grassy habitats associated with small-scale agriculture, grasslands, wetland fringes and forest edges at lower elevations, chiefly below 500 m, feeding primarily on seeds including cultivated grains of all types, and a variety of vegetative matter and invertebrate prey when breeding (Giudice and Ratti 2001).

Conservation and Recommendations In the parts of its range that are characterized by small farms, multiple crop types, and livestock, populations are generally stable or even increasing. Declines may occur due to intensification of agriculture, primarily through the loss of diverse edge habitats, and secondarily through impacts from pesticides, and also wetland habitat loss and degradation (Giudice and Ratti 2001). Conversion of farmland to suburban housing may also lead to Ring-necked Pheasant populations being extirpated. Each of these habitat changes occurs in the Ring-necked Pheasant's provincial range, and may explain local declines.