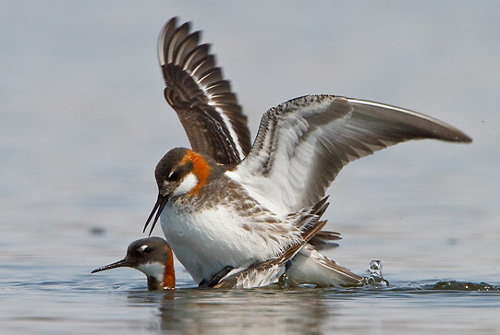 Characteristics and Range The Red-necked Phalarope is a fascinating shorebird in that it lives as a pelagic seabird for up to 9 months of the year. It is the smallest phalarope, and as in other phalarope species, the brightly coloured, polyandrous females fight ferociously over the males, which provide all the parental care. Whilst feeding, Red-necked Phalaropes spin erratically to stir up food, which they then lift from the surface of the water (Rubega et al. 2000). Unfortunately for most bird watchers in North America, many of these interesting facts are not observable. It has a circumpolar breeding distribution, with most North American birds nesting in the arctic and taiga hinterlands across the far north beyond most human habitation, and spends the non-breeding season out to sea, especially off the western coast of South America.

Distribution, Abundance, and Habitat The Red-necked Phalarope reaches the southern edge of its breeding range in British Columbia's Northern Boreal Mountains Ecoprovince. The main cluster of Atlas records came from the Haines Triangle in the Tatshenshini Basin of far northwestern British Columbia, in the same area as the only previously confirmed British Columbia nesting locations (Campbell et al. 1990). Atlas surveys confirmed breeding farther east, of fledged young with adults on a small lake in the Tuya Range of the Cassiar Mountains, which may represent the southernmost breeding record in the province, and recorded adults in potentially suitable breeding habitat in Tatlatui and Spatzizi Plateau Wilderness provincial parks. Like many shorebirds that end their northbound migration in May or June and start their southbound migration in June or July, there is a chance of encountering this phalarope anywhere in the province during the spring and summer months, but these latter records along the northern border of the Sub-Boreal Interior Ecoprovince are a plausible potential southern limit of the breeding range.

Conservation and Recommendations It is Blue-listed in British Columbia due to its small population and breeding range here. Elsewhere, there is some conservation concern. Globally, at least some populations are declining (BirdLife International 2015), and a Maritimes Canada stopover site that hosted some two million phalaropes in the 1970-80s no longer hosts the species; the reasons for this are not understood, although local breeding declines have been noted (Brown et al. 2010).