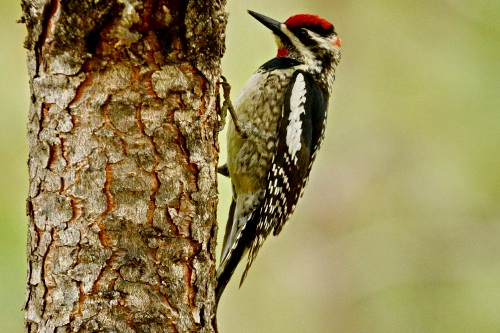 Characteristics and Range The Red-naped Sapsucker is one of four sapsuckers (woodpeckers) that regularly drill holes in tree bark to feed on the sap. Birds maintain and defend extensive systems of sap wells, which other species such as hummingbirds, squirrels, and wasps also take advantage of as food sources. Until quite recently, three of the four sapsuckers, including the Red-naped, likely formed a single species that occupied a widespread range across northern North America. The Pleistocene ice sheets split their populations, which became further fragmented by geographic barriers like the Rocky Mountains. These separated populations evolved into distinct species, which have come back into contact with each other following the ice retreat. The range of the Red-naped Sapsucker is wedged in between those of the Red-breasted and Yellow-bellied Sapsuckers, with which it hybridises. The Red-naped is a short distance migrant, breeding from central British Columbia south through the eastern Cascade and northern Rocky Mountains, and wintering in the southern Rocky Mountains south to the Mexican Sierra Madre (Walters et al. 2014).

Distribution, Abundance, and Habitat The Red-naped Sapsucker is widespread across British Columbia's southern interior plateaus, mostly east of the Coast Mountains and south of about 53°N. The Atlas filled distribution gaps at the northern end of the southern Rocky Mountain Trench and in the rain shadow of the Coast Mountains. These may represent local range expansions over the two decades since The Birds of British Columbia was published. At the interface of the three sapsuckers' ranges around the Interior Plateau, distinguishing hybrids from pure birds can be very challenging, but Red-napeds could occur in drier forests along and north of the Nechako River.

Conservation and Recommendations The highest counts on Breeding Bird Survey routes are in British Columbia, which is why the province has a high global responsibility for Red-naped Sapsucker populations (Walters et al. 2014). There are no major management concerns for the species, which is stable or gradually increasing (Environment Canada 2011), but local extirpations may have occurred through riparian habitat loss. Red-naped Sapsucker is a keystone excavator in British Columbia forests: it excavates cavities used by a wide range of other animals (Martin and Eadie 1999). Forest harvest plans that include retention of its preferred deciduous stands are recommended. The past century has seen substantial natural and anthropogenic changes in British Columbia's interior forests (Pojar 2010). The trio of sapsuckers in British Columbia form hybrid zones that provide useful markers in predicting forest birds' responses to changes of climate and forest cover (Seneviratne et al. 2012).