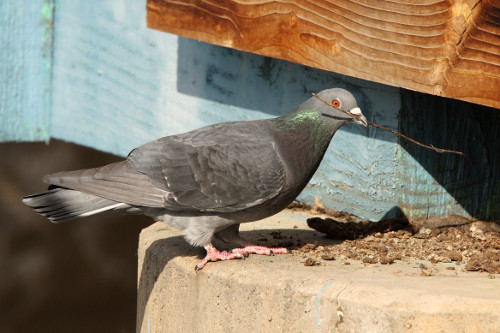 Characteristics and Range The Rock Pigeon was one of the first birds to be domesticated and introduced to places outside its ancestral range by humans, about 5,000 years ago. Native to parts of Europe, north Africa, the Middle East, western and southern Asia, domestic birds first entered North America in the early 17th Century, with European settlers arriving on the Atlantic Coast. It rapidly became feral and spread across most of the continent south of the Boreal Forest, closely associated with human habitation, especially towns and cities. There are few major human settlements worldwide that do not now support feral populations (Lowther and Johnston 2014).

Distribution, Abundance, and Habitat The distribution during the Atlas remained largely unchanged from when The Birds of British Columbia was published in 1990. Most Atlas records are associated with settlements in the south. The Atlas does not record breeding farther north than the Peace River basin, 300 km farther south than noted in Campbell et al. (1990).

The Probability of Observation model highlights the lower Fraser and Thompson valleys as the areas where the species was most likely to be found. These PObs results match areas of highest abundance on point counts, suggesting that the localised centre of abundance in Vancouver noted by Campbell et al. (1990) has spread to a wider area of the lower Fraser Valley, Georgia Depression and adjacent parts of the Coast and Mountains and Southern Interior ecoprovinces. The bird's tendency to form large flocks generates high variation around average abundance values.

Rock Doves breed singly or in colonies, largely on man-made structures, in a variety of human-modified habitats, including urban centres that support few other breeding birds. Occasionally nests are found in natural habitats, including crevices on cliff faces (Campbell et al. 1990).

Conservation and Recommendations The British Columbian population of this exotic, adaptable species appears to be stable based on Breeding Bird Survey results. It is widely considered a pest, but few studies have been conducted on feral populations in North America so evidence of a negative impact on native species and the natural environment is scant; management actions have mostly involved control programs and usually prove ineffective (Lowther and Johnston 2014).