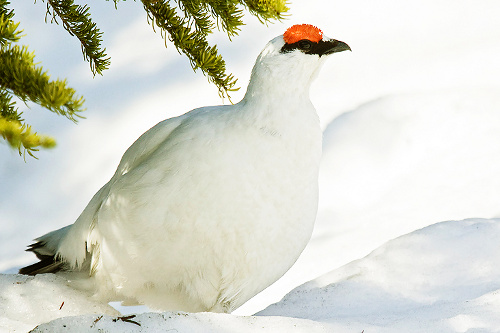 Characteristics and Range Easily recognised as a ptarmigan in either its white winter or mottled summer plumage, the Rock Ptarmigan is rarely seen except by those who visit extreme arctic and alpine environments. It is the only bird species in which all populations spend their entire life cycle in inhospitably cold and windswept tundra regions around the northern hemisphere, retreating only from the northernmost regions during the long period of winter darkness (Montgomerie and Holder 2008). The Rock Ptarmigan is a widespread resident in Arctic tundra across northern North America, and south in isolated populations in alpine tundra to British Columbia, and in heathlands to Newfoundland. In the Palearctic it is resident in Arctic and alpine tundra regions across Eurasia.

Distribution, Abundance, and Habitat The Rock Ptarmigan is a locally rare to uncommon resident in mountains in northern and western British Columbia (Campbell et al. 1990). The Atlas surveyors found a similar, generally sparse distribution, with a cluster of records on the Stikine Plateau. The Atlas records showed breeding only north of about 52°N, but survey effort was low in the alpine due to difficulty of access. Campbell et al. (1990) reported breeding farther south in the Coast Mountains. Most breeding is from about 1,000-2,000 m.

The Atlas records included the Rock Ptarmigan in only forty 10-km squares, primarily in the Northern Boreal Mountains Ecoprovince, and breeding was confirmed in only ten squares. The Probability of Observation model expands on the distribution, indicating the highest likelihood of finding this ptarmigan is on the Stikine and Yukon plateaus, and in the Cassiar and northernmost Rocky mountains. The scarcity of this species and its remote high-elevation habitat contributed to the low frequency of observation. Information is insufficient for a reliable assessment of changes in breeding abundance since 1970 (Environment Canada 2011).

Conservation and Recommendations Because of its high-elevation and high-latitude distribution, the Rock Ptarmigan faces few anthropogenic threats (Environment Canada 2011). However, like the other two species of ptarmigan, the Rock Ptarmigan is sensitive to disturbance and the potential effects of climate change.