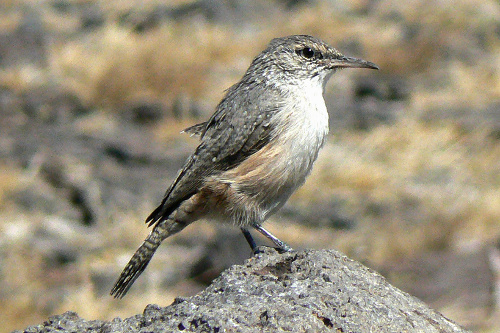 Characteristics and Range To see this perky member of British Columbia's avifauna, the birder has to either encounter a vagrant Rock Wren (the species shows a propensity for wandering) or, much more likely, travel to one of its breeding locales--sunny rock slides, mostly in the province's southern interior. It is a resident and short-distance migrant restricted to more arid parts of western North and Central America, reaching the northern extent of its breeding range in British Columbia (Lowther et al. 2000).

Distribution, Abundance, and Habitat This wren breeds in highly localized, small populations. The suggestion that the Rock Wren may be extending its range northwards in British Columbia (Campbell et al. 1997) is not entirely borne out by the Atlas findings, which mostly mirror the range known two decades ago. The Atlas shows that the centre of provincial distribution remains in the Southern Interior Ecoprovince, and continued occupation of outlying sites, including probable breeding on Mount Tuam on Salt Spring Island and Perkins Peak in the Chilcotin. Two more northerly locations recorded during the Atlas fit the pattern of summer observations north to Tumbler Ridge noted in Campbell et al. (1997): a bird on territory at the east end of Nechako Reservoir and a singing male by Williston Lake.

The Rock Wren naturally occurs at low densities; consequently its Probability of Observation is low for large areas potentially supporting suitable habitat. The highest Pobs values are from the Okanagan and Similkameen valleys where the distribution is most clustered, confirming that the Southern Interior Ecoprovince still supports the core of the provincial population (Campbell et al. 1997). Rock Wrens occur across a broad altitudinal range; the small sample of point count records indicates a slightly higher abundance between 250 and 750 m, but comparison of abundance between ecoprovinces is not possible.

The Rock Wren is found most often on exposed rock outcrops, cliffs and talus slopes, as long as the surface provides the wren with crevices, cracks, and holes in which it forages and nests. It is also found in man-made environments with similar features, such as steep rocky roadsides, tunnels, quarries and boulder piles. It also occurs among boulders in the alpine, breeding from near sea level to 2,100 m (Campbell et al. 1997).