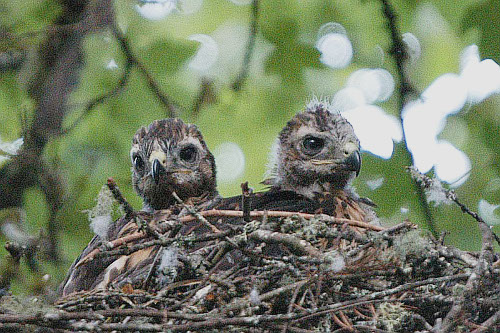 Characteristics and Range The Red-tailed Hawk is one of the most common birds of prey in British Columbia, and has one of the most recognizable calls of any bird: a high-pitched scream that has become a symbol of rural and wilderness areas. The "red-tail" is a large hawk, both a sit-and-wait ambush predator that perches on roadside light standards, fence posts, or trees; and a soaring hunter that is a familiar sight floating on thermals above open areas. Its range includes virtually all of North America south of the treeline (Preston and Beane 2009). Across the northern part of this range, including much of British Columbia, it is a breeding visitor, migrating short distances south to overwinter. Three of the twelve subspecies occur in British Columbia: the distinctive dark Harlan's Hawk B. j. harlani, which breeds in the far north and is considered by some to be a distinct species; B. j. alascensis of coastal regions; and the most widespread, B. j. calurus of the interior.

Distribution, Abundance, and Habitat Red-tailed Hawks are widespread across southern, central and northeastern British Columbia, but more sparsely distributed in coastal and northern regions. The range has not changed appreciably since The Birds of British Columbia was published, but the Atlas surveys have filled many breeding season distribution gaps, especially in central-northern regions of the province. The densest clusters of records are in the Georgia Depression Ecoprovince, the dry interior, the valleys of southeastern British Columbia, the more open areas of the central interior, and the Peace River lowlands.

The Red-tailed Hawk appears to be slightly more common at lower elevation (250-500 m, corresponding to the altitude of valley floors in the southern interior), although it breeds across a wide elevation range in many habitats.

Conservation and Recommendations Red-tailed Hawk populations in British Columbia and Canada have shown a healthy long-term increase as indicated by Breeding Bird Survey data (Environment Canada 2014). This is another species that has benefited from land clearing across North America over the last 200 years, clearing that created a mix of open grassland (for hunting) and nearby woodlands (for nesting). Some Red-tailed Hawks have even adapted to breed in suburban and urban environments (Preston and Beane 2009), and often successfully overwinter in these areas. Threats may include lead poisoning due to ingestion of shot when feeding on carrion, pesticide use in agricultural regions, and collisions with high-voltage transmission lines.