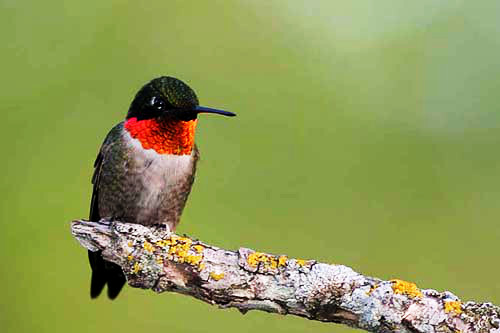 Characteristics and Range The Ruby-throated Hummingbird has the largest breeding range of any North American hummingbird, occupying deciduous and mixed wood forests from the Atlantic coast to the western and northern fringes of the Great Plains. Northeastern British Columbia represents the westernmost limit of the breeding range for this species, which winters primarily in southern Mexico and Central America (Weidensaul et al. 2013). Although this hummingbird is very familiar to even casual observers in the eastern half of the continent, spotting a Ruby-throated Hummingbird in British Columbia is a rare and special event.

Distribution, Abundance, and Habitat The Ruby-throated Hummingbird is almost entirely confined to the Boreal Plains Ecoprovince, with a nearby record from the Sub-boreal Interior Ecoprovince and an isolated record from the Taiga Plains Ecoprovince. The species was probably not well-sampled by atlassing efforts. The bird's diminutive size, reluctance to remain still, and similarity to other hummingbirds make a positive identification difficult. Most records were from feeding stations where repeated observation made identification possible. The Atlas has significantly improved our understanding of the distribution of this species within the province. When The Birds of British Columbia was published in 1990, it was considered a 'casual' visitor to the south coast and 'accidental' in the Peace River lowlands, and more recently a 'very rare summer visitant' to the Dawson Creek area with no evidence of breeding (Phinney 1998). Increased observer effort and awareness are the most probable explanation for the apparent change in distribution, and the species may well be more widespread than is indicated here.

Few of the fifteen 10-km squares from which the species was recorded across the province had multiple records, and all of these were restricted to known feeder locations. The true population of the Ruby-throated Hummingbird in British Columbia remains unknown, as does any trend in numbers. It is undoubtedly more common and widespread than reflected in the Atlas data, but challenges with detection and identification, combined with a seemingly broad habitat preference, prevent any meaningful population estimate.

The habitats this hummingbird uses in British Columbia are similar to those it frequents elsewhere in its range: forest edges and openings, backyards and gardens, stream sides and around small lakes; potentially anywhere that has a mixture of trees and flowering plants. It seems to avoid deep coniferous forests and higher elevations.

Conservation and Recommendations The Ruby-throated Hummingbird is Blue-listed in British Columbia, based on its general scarcity and restricted range in the province. Breeding Bird Survey results from the rest of Canada reliably show an ongoing, large increase (Environment Canada 2011). There are no obvious habitat-related concerns that would negatively affect the population in British Columbia, although land changes and developments may improve or diminish suitability on a local level. Ruby-throated Hummingbirds may suffer competitive exclusion from Rufous and Calliope hummingbirds which have spread into northeastern British Columbia in recent decades. Public outreach may elicit more records of this species; people with hummingbird feeders are often aware of the different species that are attracted, but most apparently do not recognize the significance of having a "ruby-throat" in their yard.