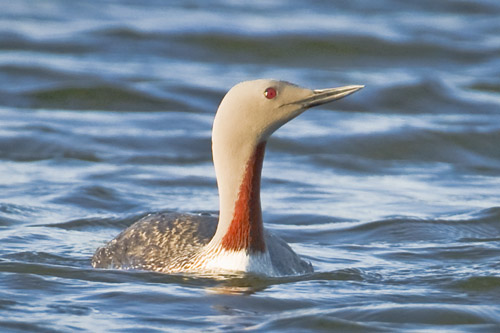 Characteristics and Range The Red-throated Loon is a bird of wild, remote places. It nests on small inland lakes and its "kwak, kwak, kwak, kwak" call as it flies overhead indicates that it has returned to its seasonal nesting site. Its sleek shape and red throat make it one of the most attractive members of the loon family. Interestingly, the Red-throated Loon doesn't feed where it nests, but either flies to the ocean or to a larger lake to feed. It breeds widely across boreal and arctic areas of North America and Eurasia; winters along the Pacific, Atlantic, and Gulf coasts of North America, and the coasts of Europe (including the Mediterranean Sea) and eastern Asia (Barr et al. 2000). It feeds close to shore in winter, preferably in sheltered bays or lagoons.

Distribution, Abundance, and Habitat The Red-throated Loon is a coastal and alpine tundra-breeding bird in British Columbia, nesting mainly in the many small bog lakes and tarns on Haida Gwaii and along the mainland and northern Vancouver Island coasts, from Bute Inlet north. It is more sparsely distributed farther north, in the Nass Basin, and on higher elevation lakes in the Omineca and Cassiar mountains and the Stikine-Yukon Plateau. This coincides with the distribution pattern noted when The Birds of British Columbia was published in 1990.

The Probability of Observation map highlights the most likely places to find this loon are where its preferred habitat (muskeg bog ponds, marshes and coastal ponds) occurs in the Coast and Mountains Ecoprovince, and lesser chances of finding it across the western part of the Northern Boreal Mountains Ecoprovince, where it prefers tundra lakes. The high PObs values noted in the north and west of Haida Gwaii coincide with where birds nested in the past, but these remote areas were not accessed during the Atlas surveys. The work of Reimchen and Douglas on Haida Gwaii throughout the 1970's and 1980's estimated the population of breeding Red-throated Loons in the archipelago to be between 784 and 892 pairs (Campbell et al. 1990).

Conservation and Recommendations There are no major conservation concerns. The Red-throated Loon is secretive, sensitive to human disturbance from recreational activities and shoreline development, and will desert sites if there is too much human activity; it lays only 1-2 eggs in a short nesting season and may not re-lay if the eggs or chicks are lost, but if left undisturbed it will return to its home site every year. It is also sensitive to water level fluctuations during unusually wet or dry summers, vulnerable to coastal oil spills, and is highly sensitive to disturbance from coastal wind farms (wind turbines) (BirdLife International 2015). With the potential growth of onshore and offshore developments along the British Columbia coast and recreational (including eco-tourism) encroachment into undisturbed areas, it is important to determine the nesting sites for these uncommon birds and implement appropriate conservation management actions.