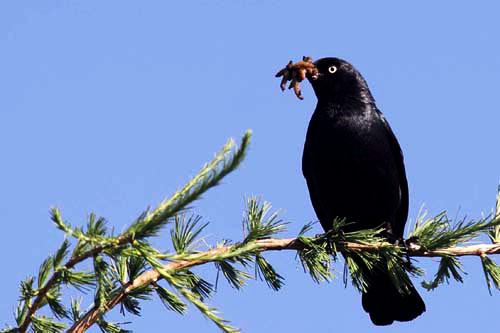 Characteristics and Range The Rusty Blackbird is one of the most rapidly declining North American bird species (Avery 2013, Greenberg and Droege 1999). Its breeding range spans the northern boreal and sub-boreal coniferous forests from Alaska to the Atlantic Coast and it winters in eastern North America from the Great Lakes to the Southern Coastal Plains. The breeding male is a sleek-looking, polished, black bird and both sexes have yellow or pale yellow eyes year-round. Its name comes from the rusty feather edges of its winter (basic) plumage. In spite of the recent decline, a visit to a northern swamp may still be rewarded with this bird's quintessential boreal wetland song of a few introductory notes followed by a sound much like the creak of rusty hinges.

Distribution, Abundance, and Habitat The Rusty Blackbird is widely distributed across the rolling plateaus and wetland-studded basins of central and northern British Columbia east of the Coast Mountains. The Atlas shows a similar northern distribution to that known when The Birds of British Columbia was published in 2001, but perhaps a retraction from the uplands of south and southeastern British Columbia, with the Atlas recording very few observations south of 52°N.

Probability of Observation modeling combined with Atlas point counts suggest the Nechako Plateau in the Central Interior Ecoprovince, and the Omineca, Skeena and Cassiar mountains of the Sub-Boreal Interior and Northern Boreal Mountains ecoprovinces support the main centres of provincial abundance. The higher PObs in the Fort Nelson River lowlands contrasted with lower abundance on point counts. Random point count surveys do not adequately sample the forested wetland habitat of the Rusty Blackbird. Campbell et al. (2001) speculated that the paucity of records in the north was mostly a reflection of difficult access and few observers. Systematic Atlas surveys have helped fill gaps, but more focused wetland surveys are still needed across northern British Columbia.

The Rusty Blackbird breeds in northern swamps, wooded bogs, and along lake and stream borders. The bulk of the records in northern and central British Columbia are from the Sub-Boreal Spruce, Sub-Boreal Pine-Spruce, and Boreal White and Black Spruce biogeoclimatic zones, where densities are generally low and most records were from 500 to 1,250 m. It was more often recorded as singles or pairs, so is generally not loosely colonial in British Columbia, unlike its relative the Brewer's Blackbird.

Conservation and Recommendations Unlike most North American blackbirds, the Rusty Blackbird population has declined steeply, by 85-95% since 1970, based on results of the Breeding Bird Survey, Christmas Bird Counts, and the Quebec Checklist Program (Avery 2013, Greenberg and Droege 1999). This dramatic decline prompted The International Rusty Blackbird Working Group to form in 2005, to collect and share information, and develop conservation strategies and management programs to understand and reverse the decline (IRBWG 2013); causes are thought to include winter habitat loss, breeding habitat degradation, and mortality from blackbird control programs. Citizen scientists can participate in the spring and winter Rusty Blackbird blitz surveys to contribute to knowledge of migratory and habitat requirements.