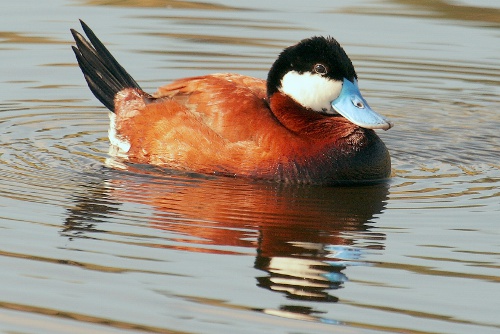 Characteristics and Range With its colourful plumage, cocked stiff tail, and unique bubbling display, the male Ruddy Duck is one of our most attractive and charismatic waterfowl. Females have the distinction of laying the largest eggs, relative to their body size, of all waterfowl. The breeding range extends across much of western North America, with the greatest concentrations in the prairie pothole region (Brua 2002), and isolated populations as far south as Central America and the Caribbean. Most Ruddy Ducks spend the winter along the Pacific and Atlantic coasts, or inland across the southern half of the continent. The Georgia Depression Ecoprovince is a frequently-used wintering area.

Distribution, Abundance, and Habitat The breeding distribution shown by Atlas data confirms that there has been little change since The Birds of British Columbia was published in 1990; most breeding records came from the Central and Southern Interior ecoprovinces, with reasonable numbers also in the Boreal Plains and Southern Interior Mountains ecoprovinces. These data are probably a good measure of the breeding distribution of the Ruddy Duck in British Columbia, given the species' fairly conspicuous nature.

The Probability of Observation values match the breeding distribution closely, highlighting the Fraser Plateau and Thompson River drainage as the most likely places to find Ruddy Ducks, followed by the Southern Rocky Mountain Trench and Peace River lowlands. Most Ruddy Ducks are found in the 350-1,250 m elevation range, but too few Atlas point count data were collected to draw conclusions on abundance, and randomized point counts generally don't sample the localized wetland habitat of Ruddy Ducks very well.

Wetland characteristics are more important determinants of Ruddy Duck breeding than biogeoclimatic zones. Ruddy Ducks feed and breed within a range of wetland types, but typically those that are semi-permanent or permanent, provide water depths >1.5 m, and have extensive cattail (Typha) species or other emergent vegetation (Brua 2002, Campbell et al. 1990). Around Riske Creek on the Chilcotin Plateau, Savard et al. (1994) found that ponds used by Ruddy Ducks were larger, deeper, and had fewer trees surrounding the wetland than unused ponds. Turbidity and water chemistry had minor effects on pond use. Aquatic invertebrates taken from the muddy bottom substrate, especially midge larvae (Chironomidae), are the principle food items (Brua 2002).

Conservation and Recommendations The Ruddy Duck has a large and secure North American population, which shows a long-term increase on the Prairies (Brua 2002, Fast et al. 2011). Because it tends to nest in more permanent water bodies, the Ruddy Duck is less susceptible to fluctuating water levels than most waterfowl. Hunting pressure is low. The greatest threats are drainage of breeding and wintering wetland habitats (Brua 2002). Preservation of potholes in the prairies has benefitted this species. The Atlas data provide a good baseline for future population monitoring in the province.