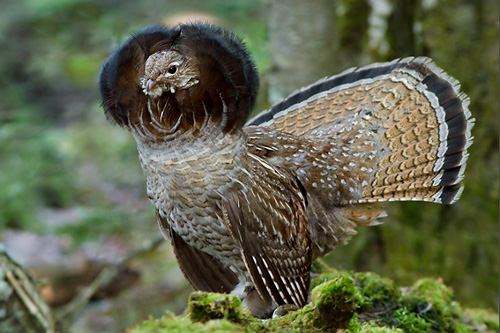 Characteristics and Range The Ruffed Grouse is a cryptic, medium-sized game bird, although the males become conspicuous during the breeding season through their spectacular drumming behavior. This territorial and courtship display involves the male standing on a structure that provides good sound resonance (usually an old log), raising its crest and black shoulder "ruffs", and beating its wings (slowly at first, then very rapidly into a crescendo) to generate the drumming sound. The Ruffed Grouse is restricted to North America, where it is resident throughout the boreal forest region and some wooded hill ranges farther south (Rusch et al. 2000).

Distribution, Abundance, and Habitat The Ruffed Grouse is widespread in suitable habitat throughout the province except on Haida Gwaii and other islands off British Columbia's north coast. This range has changed little since The Birds of British Columbia was published in 1990; however, the Atlas surveys have expanded confirmed breeding in the northwest of the province and along the upper reaches of the Fraser River. The Ruffed Grouse may be more widespread in mainland British Columbia's north and central coast regions than the relatively restricted Atlas survey coverage suggests, and may occur on some islands off the north coast that are close to the mainland.

High Probability of Observation values are most extensive across the plateaus of the Sub-Boreal Interior and Central Interior ecoprovinces; point counts confirm that this area also supports the highest abundance, hence the core of British Columbia's population. Other important areas highlighted by the PObs model and abundance data are northern Vancouver Island; the Columbia, Kootenay, Peace and Stikine river drainages; and the Liard Plateau. The Ruffed Grouse is found across a wide altitudinal range, but occurs at highest abundance between 750 and 1,250 m.

Across North America, the Ruffed Grouse is most common in early successional forests dominated by aspen and poplar (Populus) species (Rusch et al. 2000). As such, it is fairly common in several biogeoclimatic zones where these tree species are common, but most abundant in Sub-Boreal Pine-Spruce in the Central Interior Ecoprovince. Throughout the province, the Ruffed Grouse nests on the ground in forested habitat, usually with a deciduous component, and usually near water. Nests in British Columbia are mostly found at the base of trees; under bushes, shrubs or ferns; and under or next to fallen logs (Campbell et al. 1990).

Conservation and Recommendations The Ruffed Grouse is not at risk in British Columbia, and is considered secure across its entire range (British Columbia Ministry of Environment 2014). British Columbia is afforded a low responsibility for its conservation, although a recent estimate suggests that the province supports about 28% (just over 5 million birds) of the global population (Partners in Flight Science Committee 2013). It is the most popularly hunted upland game bird in British Columbia, accounting for 50-60% of the annual upland game bird harvest; annual harvests over the past 10 years have ranged from 65,000 to 123,000 birds (British Columbia Ministry of Forests, Lands and Natural Resource Operations 2014). Permanent loss of riparian forests to development is likely the major concern for this species; inundation from large scale hydroelectric projects can also cause loss of suitable riparian habitat until a new riparian corridor develops.