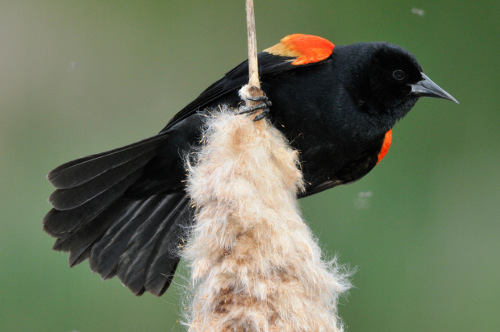 Characteristics and Range In summer, the male blackbird, with his red and yellow epaulettes and 'onk-a-ree' song, is a familiar denizen of our local ponds and marshes. The smaller, brown-striped female is so different from her mate that a quick glance at a field guide may be necessary. This is one of the most polygynous bird species: up to 15 nesting females have been found within the territory of one male (Yasukawa and Searcy 1995). This species' breeding range extends across North America, excluding the far north and the northern fringes of the Boreal Forest, and southward into Central America and Cuba. It winters along the Pacific Coast from southwestern Alaska to western Mexico and across the continent south of the Great Lakes to the Atlantic seaboard.

Distribution, Abundance, and Habitat Campbell et al. (2001) noted that the Red-winged Blackbird became established in northern British Columbia since the 1940s, and that nesting records were concentrated from 1971 to 1981, possibly a reflection of survey effort. The Atlas results suggest that there has been little change in the breeding range of this species since The Birds of British Columbia was published in 2001. Both sources show records concentrated in the Southern Interior, Central Interior, Georgia Depression and Boreal Plains ecoprovinces, and in the southern Rocky Mountain Trench. There may have been some infilling of distribution gaps, e.g. in the southern Coast Mountains, but these could be the result of increased coverage by the Atlas in areas that were poorly surveyed previously.

Highest Probabilities of Observation and abundance are in the ecoprovinces where breeding evidence is concentrated. In the Southern Interior and Southern Interior Mountains and the Georgia Depression, the birds are concentrated in the main valleys, reflecting the greater number and extent of wetlands and lakes at relatively low elevations. Abundance peaks between 250 and 750 m in response to this valley floor nesting pattern, as well as the high density of blackbirds in the Peace River lowlands. In the Central Interior, this bird is similarly abundant locally but distributed over a much larger area, reflecting the many scattered lakes and wetlands on the higher (>1,000 m) uplands of the Chilcotin and Nechako plateaus.

Red-winged Blackbirds nest in wetlands, including very small wetlands, with tall emergent vegetation and bordering willows (Salix species) or other moisture-loving shrubs. Sites include small ponds, beaver ponds, lake margins, sloughs, ditches, and muskegs in the north. These birds also colonize ponds and marshes in suburban areas and city parks. They tolerate adjacent trees and forest edges more so than Yellow-headed Blackbird which, at larger wetlands, commonly results in the Red-winged Blackbirds nesting nearer to the shore, while the larger birds nest further out over deeper water.

Conservation and Recommendations While it is not a species of conservation concern, control measures used to reduce damage to some crops by large flocks of Red-winged and other species of blackbirds are now a major source of mortality in some parts of their North American range (Yasukawa and Searcy 1995). Habitat loss resulting from destruction of wetlands has already led to the extirpation of some colonies in British Columbia