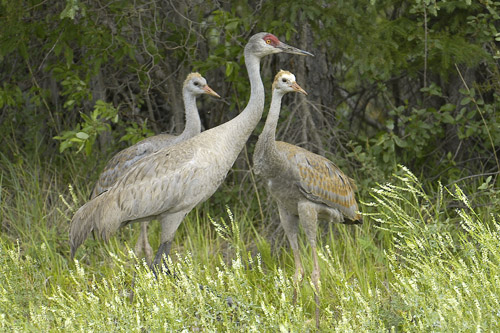 Characteristics and Range Sandhill Cranes are one of the most dramatic and delightful birds whose spectacular migrations and prehistoric rolling call have delighted people for centuries. They are marvelous harbingers of spring as they stream overhead through British Columbia's interior valleys and north along the coast, calling through the night, a reminder that winter is nearing its end. After arriving on their traditional nesting grounds, they feed calmly before pairs disperse to breed. Sandhill Cranes can be residents or long-distance migrants within North America. The cultural significance of Sandhill Cranes is highlighted by one Haida interpretation for the name Delkatla, meaning 'place of cranes dancing'; Delkatla Wildlife Sanctuary in Haida Gwaii is one of their traditional breeding grounds.

Three migratory subspecies likely occur in British Columbia. For conservation and management purposes, they are divided into separate populations that follow traditional migratory routes: the Pacific Population that migrates up and down the Pacific Coast is comprised of Lesser Sandhill Cranes (G. c. canadensis); the Central Valley Population is mostly comprised of the interior Greater Sandhill Crane (G. c. tabida) that breed from California north to British Columbia (where it breeds in the interior, lower Fraser Valley and northern Vancouver Island); and the Mid-Continent Population that migrates across the Pacific, Central and Mississippi flyways, occurring locally in northeastern British Columbia. The Mid-Continent Population was believed to comprise a mixture of Lessers, Greaters and Canadian Sandhill Cranes (G. c. rowani), but recent genetic work has questioned the validity of the latter in this population (CFWMGBTC 2006, Gerber et al. 2014).

Distribution, Abundance, and Habitat Sandhill Cranes are quite widespread in central, northeastern and some coastal regions of the province, and along the length of British Columbia's Rocky Mountain Trench. Atlas evidence supports the distribution known when The Birds of British Columbia was published in 1990 and as predicted in Gebauer (2004), except for the Skeena and Nass river basins where no breeding birds were observed during the Atlas surveys. The Central Interior (especially the wetland-studded Cariboo Plateau), Taiga Plains, Boreal Plains, and Coast and Mountain ecoprovinces all showed quite extensive areas where this crane is most likely to be found.

The areas of highest abundance of breeding Sandhill Cranes in British Columbia are Haida Gwaii and adjacent mainland areas. They are more widespread but at a lower abundance on the Central Interior plateaus and the Peace and Fort Nelson river lowlands.

Conservation and Recommendations While there were conservation concerns for some populations in the past, Sandhill Crane populations in North America have increased greatly since the 1970s, including in British Columbia; as such the species is no longer considered at risk in the province, as was the case until recently. Habitat alteration, including wetland loss and development projects, and human disturbance remain local threats; being reliant on selected breeding, staging and winter sites adds to the crane's intrinsic vulnerability. Standard surveys of core breeding areas are still needed to better determine the subspecies numbers and nesting sites in the province (Gebauer 2004).