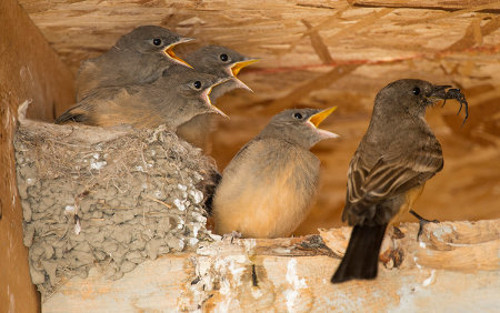 Characteristics and Range This elegant, medium-sized flycatcher of open country is easily recognised by its cinnamon undersides. The Say's Phoebe breeds over much of western North America from the Great Plains west to the Sierra Nevada and from the Yukon tundra south to the Mexican Sierra Madre (Schukman and Wolf 1998). A short- to medium-distance migrant, northern populations winter from the southwestern United States to central Mexico, overlapping with southern residents.

Distribution, Abundance, and Habitat The Say's Phoebe has a restricted breeding distribution in interior British Columbia, with two discrete breeding populations: one clustered in the Southern Interior Ecoprovince with outliers in the East Kootenay, and the other very dispersed across the Northern Boreal Mountains. The distribution pattern from the Atlas is similar to that observed when The Birds of British Columbia was published in 1997, including a breeding distribution gap of about 600 km across forested areas of central British Columbia Atlas observations in the Sub-Boreal Interior and Boreal Plains ecoprovinces are within suitable breeding dates and habitat, but with no stronger suggestion of breeding.

Probabilities of Observation largely match the distribution pattern. The accuracy of the Pobs model in the Southern Interior is probably quite high, with a very discrete, small area of high Pobs values in the South Okanagan, whereas the model projection in the north may over-estimate Pobs values. Most breeding is below about 500 m, where highest abundance was recorded during the Atlas. The highest Probabilities of Observation are in the Ponderosa Pine and the Bunchgrass biogeoclimatic zones in the south and in the Boreal White and Black Spruce and the Spruce-Willow-Birch biogeoclimatic zones in the north. This species has shown a large increase in abundance across western Canada since 1970, although there is some uncertainty in the assessment (Environment Canada 2011); this increase is also seen in British Columbia (Environment Canada 2014).

The Say's Phoebe prefers open country, rangelands, and semi-arid sites, often near human habitation. In northern British Columbia It is often found near human structures, such as hunting lodges, mine sites, and along road cuts. It generally avoids watercourses, rich agricultural land, and heavily forested land.

Conservation and Recommendations This species appears to have benefitted from human activity; overall, threats on the breeding and wintering grounds appear to be few, as evidenced by the widespread increasing population trends.