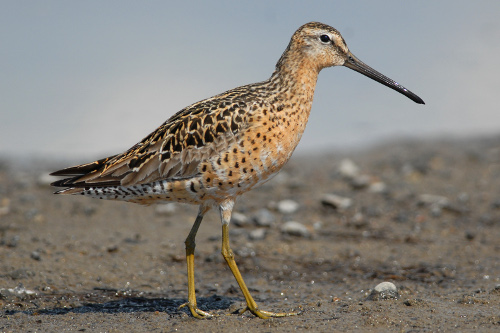 Characteristics and Range Separating basic and especially alternate plumages of Short-billed and Long-billed Dowitchers poses one of the most challenging bird identification problems for birders, and the official recognition that two species occur in North America was not made until 1950. Only the Short-billed Dowitcher breeds in British Columbia, one of three disjunct areas of North America where it nests: the coast and mountains of northwest British Columbia and southern Alaska; the Boreal Forest-Taiga interface from northern Manitoba to Alberta; and muskegs from Labrador westward to the coast of James and Hudson Bays. Each of these three areas has a different subspecies; L. g. caurinus breeds in British Columbia (Jehl et al. 2001). The species winters along the Pacific and Atlantic coasts from about 40°N south through Central America on both coasts and down the Pacific Coast to Peru.

Distribution, Abundance, and Habitat Short-billed Dowitchers have been documented breeding in two areas of the province; the extreme northwest corner in the Haines Triangle, and on northern Haida Gwaii (Campbell et al. 1990). Breeding has not been documented in the Peace River area, despite suggestions by Godfrey (1986) that they probably breed there, or statements that they do breed in eastern British Columbia (e.g. Semenchuk 1992).

Nests of this species are "about the hardest of all shorebirds to find" (Rowan 1927), as the species sits very tight on a nest, even if disturbed. Not surprisingly then, Short-billed Dowitchers possible Atlas breeding evidence only comes from a single 10-km square, in the far northwestern Northern Boreal Mountains Ecoprovince. There are no Atlas records from the Delkatla Wildlife Sanctuary on Haida Gwaii. A small breeding population was discovered there in 1984 (Campbell et al. 1990), however the species apparently hasn't nested there for many years, possibly as a result of the restoration in 1994 to allow tidal influx into the marsh where it formerly nested (Hearne 2015).

Breeding habitat is characterized as "wet, boggy muskeg" in the subalpine of the Haines Triangle and a "brackish estuarine marsh with sphagnum, sedges and rushes" on Haida Gwaii (Campbell et al. 1990).

Conservation and Recommendations The status of Short-billed Dowitcher in the province is poorly understood. The avifauna of the Haines Triangle should be systematically surveyed for this and several other species. Breeding of the subspecies L. g. hendersonii is possible as it breeds relatively close to British Columbia in the Peace River area of Alberta (Federation of Alberta Naturalists 2007).