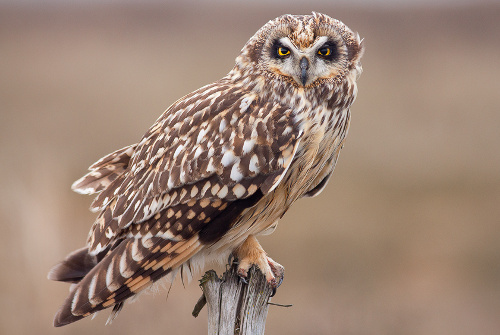 Characteristics and Range The crepuscular hunting times of the Short-eared Owl and its habit of foraging over open pastures make it one of the most often-seen owls in British Columbia. Its buoyant flight and big head are distinctive, so it is relatively easily recognized from a distance from the harriers and other hawks that might be hunting on the morning and evening shift. It is one of the most widely distributed owls in the world, found throughout much of North America, Eurasia, and a number of oceanic islands. In North America it breeds in most suitable open habitats from the low Arctic south to the northern United States as well as many Caribbean islands.

Distribution, Abundance, and Habitat Short-eared Owl breeds locally in suitable habitat throughout British Columbia, although it is absent as a breeder from much of the coast outside the Lower Mainland. The distribution shown by Atlas data is very similar to that reported in The Birds of British Columbia in 1990. Atlas data are too few to generate a Probability of Observation model and calculate abundance model.

Conservation and Recommendations Data from the Breeding Bird Survey and the Christmas Bird Count indicate that the Short-eared Owl has suffered a large decrease in population in Canada since 1970; the most likely cause for this decline is the loss and degradation of their breeding and foraging habitats (Environment Canada 2011, Wiggins et al. 2006). The Fraser River delta is the main wintering area for the species in British Columbia; Christmas Bird Count results showed an approximate three-fold decrease in numbers there between 1972 and 1987 (Campbell et al. 1990).