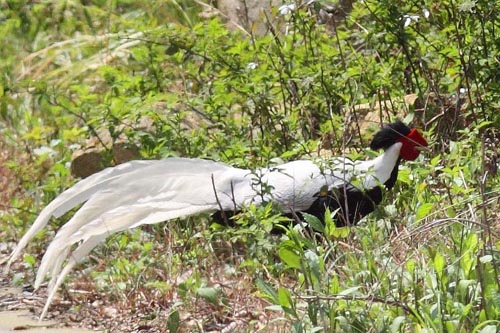 Characteristics and Range The native range of Silver Pheasant is confined to Southeast Asia and parts of China, where it inhabits hill and montane, mainly evergreen forests (BirdLife International 2015). The stunning plumage of the male in particular has led to its popularity around the world as a cage bird and zoo exhibit. In the early 1970s, a bankrupt zoo in Nanaimo released about a dozen Silver Pheasants into nearby forest. By 2004, they had spread at least 10 km north, 6 km west, and 16 km south of their original release point, and become an apparently self-sustaining population (Monty 2004). This may be the only feral population of this species in North America.

Distribution, Abundance, and Habitat Adults with recently fledged young observed in June and July of 2010 and 2011 confirm that the species continues to sustain a population in two 10-km squares, around and to the east of Brannen Lake between Nanaimo and Lantzville. The Silver Pheasants in this area breed in Douglas-fir (Pseudotsuga menziesii), and Arbutus (Arbutus menziesii) forests on drier south-facing hillsides.

Conservation and Recommendations As an alien species, the Silver Pheasant has no provincial status designation. Continued monitoring and reporting of observations to programs like eBird could help establish whether Silver Pheasant should be treated like other introduced exotic species, e.g. the Ring-necked Pheasant.