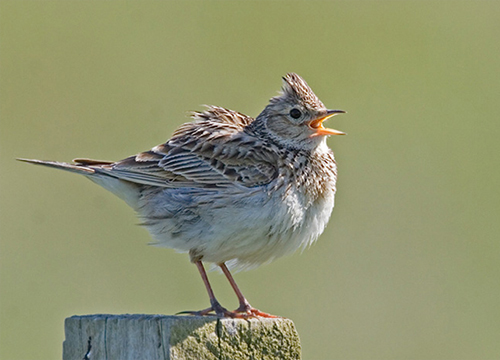 Characteristics and Range The song of the Sky Lark - a sweet cadence delivered from the zenith and parachuting descent of its towering display flight - is one of the world's best-known natural sounds. It has inspired people from all walks of life for centuries, perhaps most famously in Percy Shelley's 1820 poem "Ode to a Skylark". So evocative is the bird's song that European emigrants historically translocated populations to such far flung destinations as New Zealand, Australia, Hawaii and continental North America, including British Columbia.

The bird's native range spans the Palearctic realm of Europe and Asia. In North America, the northeast Asian subspecies breeds in far northwest Alaska, and occurs as a vagrant down the Pacific coast. At least ten attempts have been made to introduce the European subspecies to different parts of Canada and the United States, but only two were successful, the introduction to British Columbia by the British Columbia Natural History Society (with financial support from the provincial government) in the early 1900s, and that on Hawaii (Campbell et al. 1997).

Distribution, Abundance, and Habitat Atlas records for Sky Larks come only from the Saanich Peninsula of southeast Vancouver Island, from four discrete patches of habitat within a total area measuring approximately 10 kilometres north-to-south, and up to 6 kilometres east-to-west. Victoria International Airport is the northernmost site, and Martindale Flats the southernmost. This area of occurrence is much reduced from the early 1960s, when an estimated peak population of about 1,000 was widespread across the Saanich Peninsula and other scattered locations on south-east Vancouver Island (Stirling and Edwards 1962). Breeding during the Atlas period was confirmed at one location, and was probable in the other three 10 km-squares, based on persistent territorial display flight behaviour by males.

The maximum site-count reported during the Atlas period was 7 displaying birds at Victoria International Airport. However, site searches were not extensive, and other than breeding males in song flight, Sky Larks are unobtrusive during spring-summer, spending much time on the ground obscured by vegetation. The most recent population estimate is 100-200 individuals in summer 2007 (Slagboom 2007). The population decline since the 1960s is mainly attributed to habitat loss (Campbell et al. 1997).

Conservation and Recommendations Supplemental feeding took place during the cold winter of 1968-69, when the population was at its peak (Stirling and Beckett 1969). More recently, a cooperative management program was initiated between Victoria International Airport Authority and the Victoria Natural History Society, to improve habitat for Sky Larks on airport lands lying outside the fenced airport operation zone itself, through activities like altered mowing regimes (Slagboom 2007).