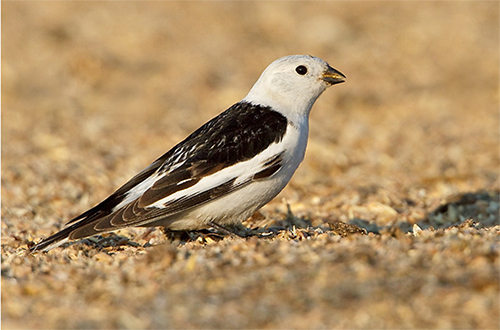 Characteristics and Range Known to most birders in British Columbia as a migrant and wintering bird in open habitats, Snow Buntings breed at high elevations in northern parts of the province, in habitats seldom visited by birders or biologists. They have a circumpolar distribution, breeding in arctic and alpine tundra across northern North America, northern Europe and Siberia, moving south to winter along coasts and in open plain habitats in northern temperate regions (Montgomerie and Lyon 2011). In Greenland and North America, breeding Snow Buntings have a large number of site specific song dialects; so many that the Greenland Inuit are able to use them to navigate between headlands in heavy fog (Montgomerie and Lyon 2011).

Distribution, Abundance, and Habitat Atlas records are confined to the Northern Boreal Mountains Ecoprovince. Four of the five 10-km squares with records are in the Haines Triangle, accessed from the Haines Road through Chilkat Pass. Little has changed in our knowledge of the breeding distribution of this species since The Birds of British Columbia was published in 2001. Confirmed breeding is still restricted to the extreme northwest corner of the province, but is suspected at high elevations across a potentially large area of northern British Columbia. Rugged, high-elevation terrain, lack of access, extremely early arrival of territorial males, nests concealed in rock crevices and the habit of males ceasing to sing when paired, at least if the female is visible (Montgomerie and Lyon 2011, Campbell et al. 2001) all likely contribute to the poor documentation of this species as a breeding bird in British Columbia.

Conservation and Recommendations Northern distribution and difficult access means the breeding habitat is relatively secure in British Columbia, except for the effects of climate change. However, in the last four decades, Christmas Bird Counts suggest serious declines of over 50% for this species across North America (Montgomerie and Lyon 2011). The species spends a large amount of time in agricultural habitats during migration and on the wintering grounds; the potential issue of agricultural chemical accumulation should be investigated. More detailed analysis of wintering populations should be undertaken to determine if the species has truly declined or shifted wintering areas. Lastly, the impact of changes in weather and habitat associated with climate change needs to be studied.