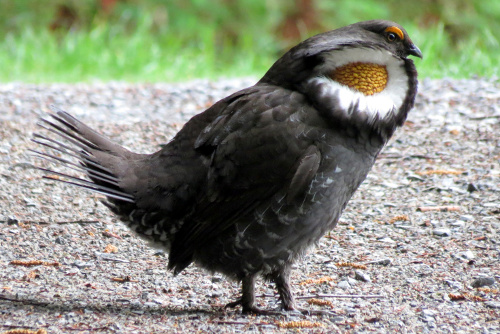 Characteristics and Range The Sooty Grouse was formerly considered conspecific with the Dusky Grouse, the two taxa together forming the Blue Grouse (Dendragapus obscurus). Mitochondrial DNA analyses combined with behavioural and habitat differences (Barrowclough et al. 2004) indicate that they are best treated as separate species. Sooty and Dusky Grouse are very similar in appearance, the Sooty tending to be darker, with males showing a yellow skin patch in display and a distinct grey band across the tip of the black tail. This similarity presents a challenge with mapping their precise distributions. The Sooty Grouse's restricted range spans forested portions of the Coast and Cascade mountains, and the Sierra Nevada, from southeastern Alaska to northern California.

Distribution, Abundance, and Habitat The Sooty Grouse is widespread in the Coast and Mountains and Georgia Depression ecoprovinces. The distribution appears unchanged since The Birds of British Columbia was published in 1990. Sooty and Dusky grouse were then lumped as Blue Grouse, so precise comparison is not possible for areas where the two may overlap along the eastern downslopes of the southern Coast Mountains and along large rivers like the Skeena that penetrate the coast ranges farther north.

The Probability of Observation model suggests that Sooty Grouse are present throughout much of the Coast and Mountains ecoprovince. Point counts indicate that it is most common below 750 m elevation, and the core of the provincial population is in the Western Hemlock biogeoclimatic zone, although several other forested and subalpine biogeoclimatic zones support similar local abundance. A well-developed herb, shrub, and grass layer is often present in the highest quality forest habitat (Zwickell and Bendell 2005).

Nests are placed in small depressions on the ground, and lined with dry vegetation, though little effort is put into making a significant nest lining. As in all grouse, hatchlings leave the nest very soon after hatching to forage in family groups with the female.

Conservation and Recommendations Breeding Bird Survey data do suggest a population decline since 1970 in British Columbia (Environment Canada 2014). Some concern may be warranted, but identifying a reason or reasons for the decline is difficult due to large-scale land-use change in western North America over the past half century. The Sooty Grouse is a popular gamebird, hunted across its range in British Columbia at apparently very low levels (Zwickell and Bendell 2005). Local populations have been extirpated in areas of the Georgia Depression, where urban development has removed forest habitat and likely led to declines in habitat quality from over-abundant herbivores, as has occurred locally in parts of the United States (Zwickell and Bendell 2005).