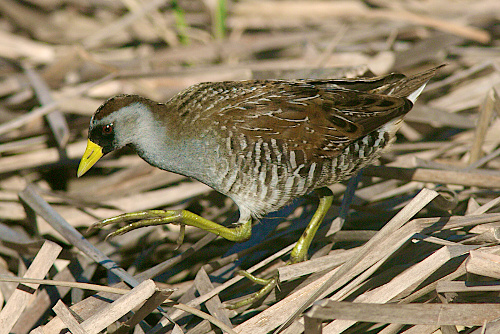 Characteristics and Range This secretive rail is far more often heard than seen, but the patience required to wait for a Sora to emerge from concealing vegetation is richly rewarded by a rather stunning bird with a bright yellow bill, black face, soft grey neck and flashing white undertail. Soras frequently call around dusk and after dark, so late evening listening searches of potentially suitable habitat in early summer are an effective way of assessing its presence. Soras breed across much of the Boreal Forest, the Great Lakes, the Prairies and through most western basins of North America, and migrate quite long distances to winter in suitable wetland habitats along Pacific, Atlantic and Gulf coasts through Central America and the Caribbean to northern South America (Melvin and Gibbs 2012).

Distribution, Abundance, and Habitat The Sora occurs widely at low to middle elevations through much of interior British Columbia east of the Coast Mountains and in the Georgia Depression, including the northeastern plains. The Atlas mapped a similar provincial distribution to The Birds of British Columbia published in 1990, indicating no change in overall range, but some filling-in of distribution gaps, especially in the Peace River lowlands, in the Lillooet River drainage, across the Interior Plateau and in the Rocky Mountain Trench.

The most extensive areas of higher Probability of Observation match the densest clusters of distribution, on the plateaus of the Central Interior ecoprovince and across the Peace River lowlands. More local high PObs values occur in the valley systems of the Southern Interior and Southern Interior Mountains ecoprovinces, and the PObs model also highlights an expanse covering the Fort Nelson River lowlands in the Taiga Plains as one of the most likely areas to find the species. The Sora is common enough that randomised point counts are an adequate sampling technique (which is not the case with other rails). Point count data show the highest abundances occur in the Central Interior and more locally in the Southern Interior, at elevations between 250 and 500 m (valley floor wetlands). Abundance is slightly lower in the Boreal and Taiga Plains ecoprovinces.

Conservation and Recommendations Sora populations are stable across much of the species range, including in British Columbia. The primary concern is maintenance of a network of wetlands throughout the migratory and wintering ranges; wetland habitat loss and modification especially along migratory routes in the United States is a concern. It is also hunted quite extensively, but the population-level impact of hunting is not well studied (Melvin and Gibbs 2012).