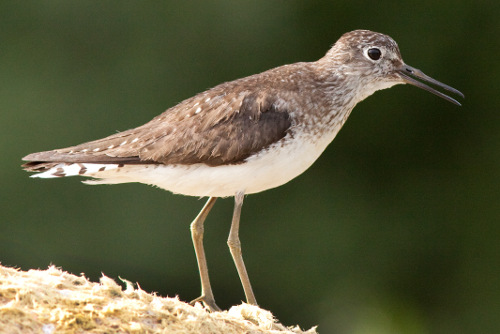 Characteristics and Range The Solitary Sandpiper is unique among North American shorebirds in nesting in trees, using old nests of larger passerines such as the American Robin. True to its name, the species breeds in widely-dispersed locations and migrates singly or in small groups. Due to its solitary and generally retiring nature - although breeding birds can react noisily to territory intrusions - it is often overlooked, and little is known about its breeding and life history (Campbell et al. 1990, Moskoff 2011). The species breeds in boreal and high-elevation forests in Canada and Alaska, and winters in the tropics from northern Mexico south through much of South America.

Distribution, Abundance, and Habitat The Atlas results confirm the picture shown by Campbell et al. (1990) of breeding sites scattered in low densities through much of British Columbia, excepting the coastal regions, with concentrations on the Chilcotin Plateau, and Peace and Fort Nelson river lowlands. The Atlas data show many more breeding records and a much wider breeding distribution in British Columbia than was known when The Birds of British Columbia was published in 1990, probably due to increased search effort in more remote areas where this species often breeds.

The Solitary Sandpiper is an uncommon and widely dispersed breeder in British Columbia, even in the areas of greatest concentration. The Probability of Observation model indicates that it is most easily found in the Taiga Plains Ecoprovince, somewhat contrary to the distribution of confirmed breeding records and abundance information from point counts, which suggest the bird is more common in the Central Interior and Northern Boreal Mountains ecoprovinces. The Atlas data extend the breeding season elevation range of the species above and below the 550 m - 1,700 m in Campbell et al. (1990), with highest abundance on point counts in the 1,500-1,750 m range, and appreciable numbers also in the 250-750 m range. Low sampling effort at higher elevations and in the relatively inaccessible breeding habitats of northwestern British Columbia May have underestimated abundance there.

Conservation and Recommendations Due to its sparse distribution, often inconspicuous behaviour and solitary nature, little is known about population numbers or trends, but habitat loss (at breeding, migration or wintering sites) is not believed to have had a significant population impact; however, loss of boreal forests from recent logging might impact nesting habitat (Moskoff 2011, Andres et al. 2012). The Solitary Sandpiper is considered to have a secure population globally and in Canada, and it is considered not at risk in the province. The Atlas surveys have expanded its known breeding range in the British Columbia, and set a valuable, if somewhat incomplete, baseline for future population monitoring.