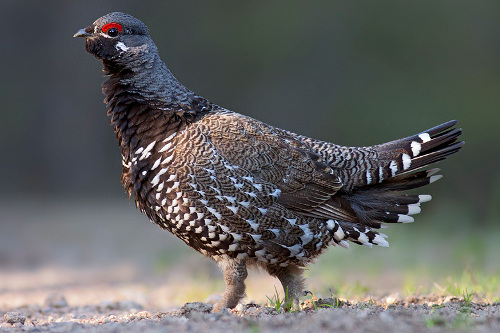 Characteristics and Range The Spruce Grouse is a medium-sized, stocky game bird that is considerably smaller than Sooty or Dusky Grouse with which it often shares habitat in British Columbia. It is one of the quietest of all game birds; even the territorial wing-clap display of the male is limited to two sharp claps unlike the prolific display of the Ruffed Grouse. It is restricted to North America, where it is resident in boreal coniferous forests, extending south into the Cascade and northern Rocky Mountains. It is a coniferous forest specialist with a diet consisting mostly of pine or spruce needles. The Spruce Grouse has undergone many taxonomic changes in the past century and its taxonomy is still under debate. Boag and Schroeder (1992) believe it is currently comprised of two distinct subspecies F. c. canadensis and F. c. franklinii, although they acknowledge that previously the latter was considered a separate species known as Franklin's Grouse.

Distribution, Abundance, and Habitat Both subspecies breed in British Columbia. F. c. canadensis occupies boreal forests in the north, while F. c. franklinii occupies montane forests in the southern two-thirds of the province (Campbell et al. 1990). The Atlas confirms the Spruce Grouse to be a widespread breeder throughout much of British Columbia, east of the Coast Range Mountains. It may have been under-recorded by the Atlas due to its cryptic appearance and nature.

Atlas data show the highest Probability of Observation is in the Northern Boreal and Sub-Boreal Interior ecoprovinces, particularly east of Atlin Lake, and to a lesser extent the Skeena and Omineca Mountains. The Spruce Grouse occupies a wide altitudinal range, and is known to occur as high as 2,500 m (Campbell et al. 1990). Its secretive nature resulted in too few point count data being collected to indicate any clear elevation preferences, and Atlas survey effort above 1,750 m was limited because of access challenges in many areas.

The Spruce Grouse nests on the ground in coniferous forests throughout its range, usually (but not always) with a spruce (Picea species) component. This was borne out by Atlas Pobs modelling, which indicated highest values in the spruce-associated biogeoclimatic zones. Nests in British Columbia are mostly found at the bases of coniferous trees, shrubs, stumps or fence posts (Campbell et al. 1990).

It is recommended that consideration be given to genetic research to help resolve the taxonomy issues.