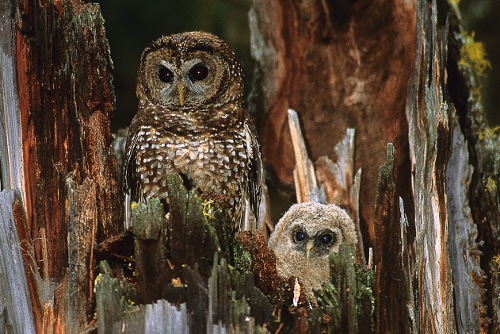 Characteristics and Range The Spotted Owl is a medium-sized, dark brown, dark-eyed owl with white spots on its body, head and neck, and no ear tufts. It is similar in appearance to the Barred Owl, but is darker overall and slightly smaller. It preys mostly on wood-rats, flying squirrels and deer mice, although other animals of similar size are taken occasionally. The Spotted Owl is resident across a patchy range spanning western and central-southern North America, and comprises three distinct subspecies. Only the Northern Spotted Owl (S. o. caurina) is found in British Columbia; from here its range extends southward to northwestern California (Gutiérrez et al. 1995).

Distribution, Abundance, and Habitat In British Columbia, it only occurs in the extreme southwest mainland corner of the province (Chutter et al. 2004). Even within this restricted range, its distribution has contracted substantially over the last 100 years.

Based on habitat and survey data extrapolations, it has been estimated that potentially 500 pairs existed in British Columbia prior to European settlement; fewer than 100 pairs were still present in 1991 and fewer than 33 pairs remained by 2003 (Chutter et al. 2004). Currently, the Spotted Owl population in British Columbia is dangerously close to extirpation with very few individuals being detected during annual surveys. Atlassers located one probable breeding pair during the Atlas period, although the site was already known to Recovery Team biologists.

In British Columbia, the Spotted Owl occurs only in mature and old-growth coniferous forests, mostly within the Coastal Western Hemlock and Interior Douglas-fir biogeoclimatic zones of the Coast and Mountains Ecoprovince; a few occur in the extreme southern portion of the Central Interior Ecoprovince (Chutter et al. 2004). Nests are usually in broken tree-tops ("chimneys") and cavities of large trees.

Conservation and Recommendations Loss and fragmentation of old-growth forest habitat and competition from Barred Owls are considered the primary threats, and the reasons for its national and provincial listing (COSEWIC 2008). A captive-breeding program was initiated by the province in 2007. Combining release of captive-bred birds with habitat protection and recruitment, and limited management of Barred Owls to exclude them from Spotted Owl breeding sites, the recovery goal is to re-establish 250 mature birds in the wild in British Columbia (Chutter et al. 2004).

All sightings of Spotted Owls, along with any evidence of breeding, should be submitted to the British Columbia Conservation Data Centre.