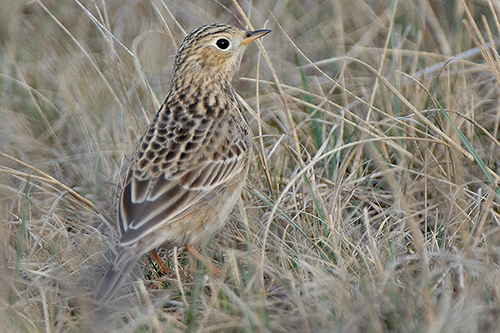 Characteristics and Range The Sprague's Pipit is one of the very few bird species that are endemic to North American native grasslands. It breeds in the Prairies and migrates to overwinter in the Southern Coastal Plains of the United States and Mexico. It has undergone major declines on both breeding and wintering grounds as a result of habitat loss, chiefly through conversion for cultivation, and approaches to ranching that are incompatible with the bird's habitat requirements (Davis et al. 2014).

Distribution, Abundance, and Habitat In British Columbia, the Sprague's Pipit is considered an accidental or casual breeder (Hooper 1997), and has only been confirmed to breed at Becher's Prairie, a high elevation (960 m) short grassland on the Chilcotin Plateau, in the early 1990s (McConnell et al. 1993). No Sprague's Pipits were reported to the Atlas, and there are no breeding season eBird records of the species from suitable habitat in British Columbia.